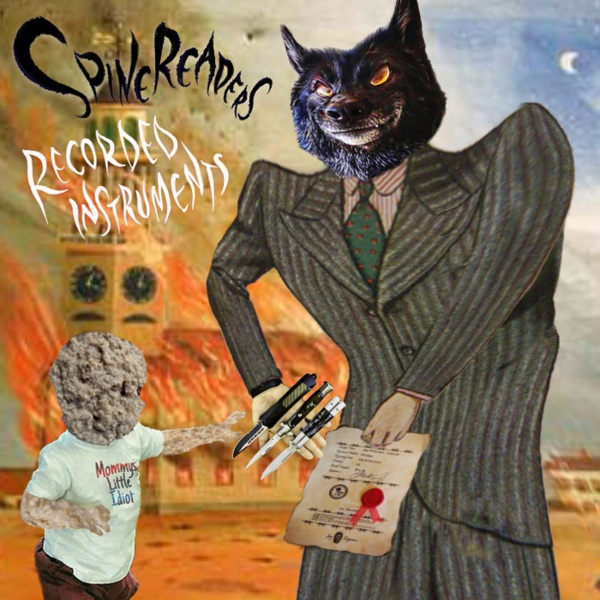 You’ve probably heard the expression “all over the map” for something that is extremely varied and defies categorization. Spine Readers is a band from Bellingham, Washington, in the extreme northwest corner of the contiguous United States, only a few miles from the Canadian border, and “all over the map” doesn’t even begin to describe their esthetic. While virtually everything they play can be reasonably called “rock,” their definition of rock encompasses such artists as Chuck Berry, David Bowie, Frank Zappa, Tom Waits, Mr Bungle, Funkadelic, Beastie Boys, and more. These elements are jumbled together into a kaleidoscopic stew that sounds as if short fragments of unrelated music had been edited together to create the “songs.” And that is exactly how some of the album was recorded, with segments as short as 10 seconds patched into Frankenstein monster tunes. But I can testify to the fact that the band was indeed able to perform this material live, a scattershot volley of unbridled creativity that was truly impressive to experience. The opening track is called “Mission Statement,” and it is exactly that, featuring the most extreme juxtapositions woven into nearly nine minutes of musical madness. There are some more conventional songs on Recorded Instruments, such as “Salt My Tambourine,” though even here there are verses reminiscent of Tom Waits, and a chorus with a melodic falsetto completely at odds with the low, gruff tones of the verses. “Mount Thy Velocipede, Homeboy” is a humorous funk tune occasionally interrupted by metal riffs with harsh vocals, dub reggae, and rap (in sequence, not simultaneously). The perpetrators of this musical schizophrenia are Sean Meyer, Todd Smith, Justin Maurer, Chris Stainback, and Aaron Cramer, and having met them, I am willing to pronounce them reasonably sane as human beings. But their music is insane in a wonderful way, and I’d recommend fans of warped pop and rock give them a listen. Since releasing the album, they’ve put out a number of singles as well, and they’re worth checking out as well.

Finisterre - Storybook (Live at Progday 1997) – Let me open by saying buy this! Why? Well Finisterre is a great band and it would be great way to say thank you to Peter Renfro. This album has been released on Peter’s Proglodite Records label....  (2001) » Read more