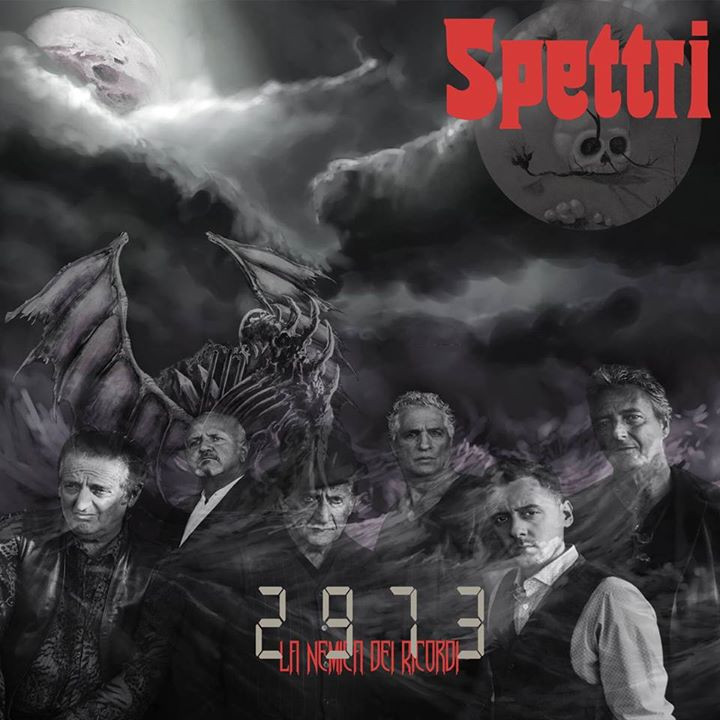 In the heyday of Italian prog rock there was an obscure band from Florence, Spettri, who released a one-off album in 1972. Their self-titled LP was little more than a demo, but contained some great music. In 2011 Black Widow Records remastered the album and reissued it on CD. Fast forward to 2015 and Spettri releases their second album 2973 La Nemica dei Ricordi. 2973 is a concept album and continues the story of their debut album, but 1001 years into the future. Starting with an introspective voyage on a magic ship the listener travels into the abyss of humankind’s fears to finally arrive at an island of peace. Not much has changed over the 43 years between albums, most of the band members remain: Stefano Melani (Hammond organ, piano, Mellotron, synths), Raffaele Ponticiello (guitar), Vincenzo Ponticiello (bass), and Ugo Ponticiello (vocals). New band members include Campo di Marte founder Mauro Sarti (drums, flute) and relative youngster Matteo Biancalani (saxophone). To maintain their sound and musical style, Spettri played instruments from the 70s and recorded the album in full analog sound on a 2-inch 24-track tape recorder. 2973 is available in vinyl mastered as AAA and on CD as ADD, and the LP is available in both stereo and mono versions! The result is an energetic set of epic heavy progressive music that belies the age of the musicians. The album opens and closes with the sounds of surf and sea gulls. In between we are treated to keyboard dominated music along with some crazed riffing, sax solos, intermittent sounds from nature, and some exquisite piano interludes. Ugo’s raspy vocals are outstanding. Spettri is also joined by Il Tempio delle Clessidre’s Elisa Montaldo (vocals) on “Il Delfino Bianco” and Stefano Corsi from Whisky Train playing Celtic harp and harmonica on “L’Approdo.” In addition to the eight songs, the CD includes Mono versions of “Il Lamento dei Gabbiani,” “La Profezia,” and “La Stiva.” So if you enjoy concept albums with a heavy prog flavor, be sure to check this one out.