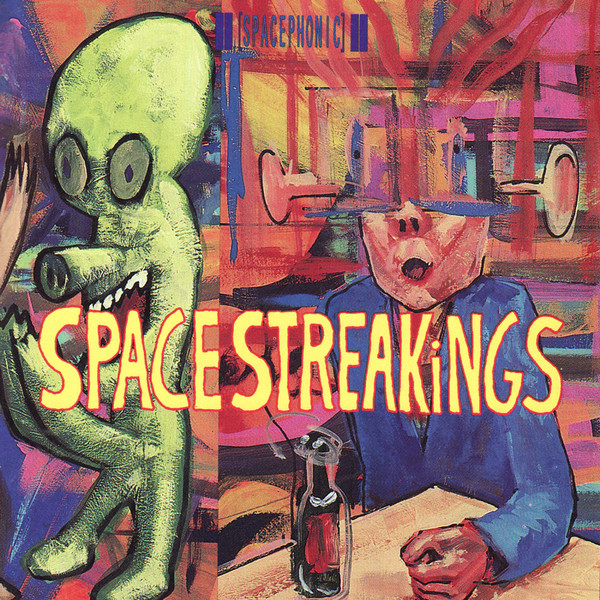 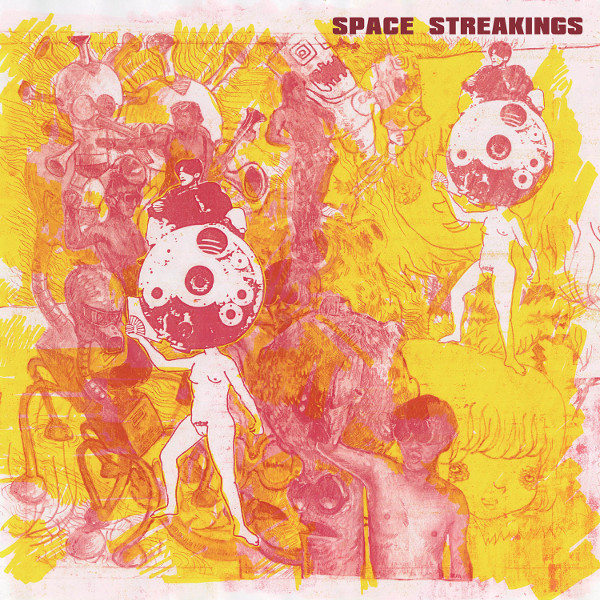 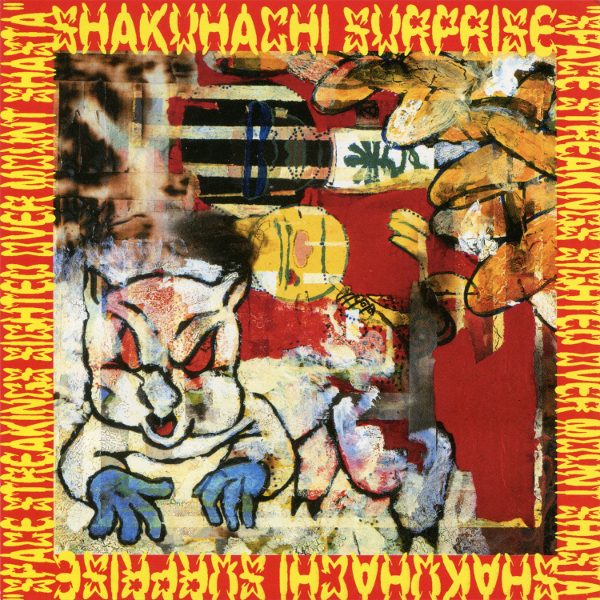 The band called Space Streakings didn’t last very long, with three years or so between their beginnings and splitting up, but the two albums they released, plus a collaboration with the American band Mount Shasta, stand as a sustained blast of semi-contained chaos, noisy, hyperkinetic thrash-jazz that are now being resurrected by Skin Graft Records. Their first album came out in 1993 and was called 初恋 (Hatsu-Koi or “First Love”), and established their modus right out of the gate: insanely fast drum machine, thrashing overdriven bass, shouted vocals, crazy electronics, and chaotic sounds from sax and trumpet. There’s a slight similarity with Melt-Banana, but instead of Yasuko Onuki’s chirping vocals we get the tortured ravings of four men who bill themselves as Captain Insect (bass, vocals, programming), Kame Bazooka (vocals, alto sax, bazookahorn), Screaming Stomach (vocals, guitar, trumpet, kazoo), and Karate Condor (“discoattacker and dragonballz,” which seems to mean turntables and electronics). This is not music for listeners with delicate sensibilities. It’s more like a ride at 200 miles per hour strapped onto a remote-controlled rocket-propelled skateboard through a crowded dystopian city, the mutant inhabitants of which have been offered a prize if they can catch you, dead or alive. If you find Už Jsme Doma a little too sedate, Space Streakings has got you covered. The last track features the foghorn-like bellowing of the bazookahorn, which was made from a large semi-truck horn. For this new release of the debut album, Skin Graft has included nine tracks taken from the group’s early cassettes, including some earlier versions of songs that would appear on the album. These are pretty rough sounding at times, though anyone who’s made it this far probably won’t mind. Suffice it to say that the band’s key qualities were present before the first album. And there’s a track called “Come Up” that actually slows down to a more or less human pace, coming off a bit like This Heat in a punkish mood.

The second Space Streakings album was called 7-Toku, originally released on Skin Graft in 1994. Famed producer Steve Albini was sent to Japan to record the album, and while the basic style remains intact, the sound seems (odd as it may seem) cleaner. The drum machine is often cranked up faster than it probably wanted to be, and the bass and guitar are heavily distorted, but the sound has a depth that was not heard before. But the album is definitely more coherent and not quite as frantic and hyperactive as the debut. Whether this is an improvement or not is left as a determination for the listener to make.

As a final bit of Space Streakings documentation, there is Space Streakings Sighted over Mount Shasta, a 1996 album featuring all the members of Space Streakings plus the members of Chicago’s Mount Shasta, using the name Shakuhachi Surprise. This takes the noisy insanity of the Japanese band and puts it in the context of a somewhat more conventional setting, with real drums instead of a machine. Karate Condor does get in some blasts from the bazookahorn, and somewhere in the density of distortion you can sometimes make out the trumpet and sax. But with two basses (Captain Insect and Jennifer White) and as many as four guitars (Karate Condor, John Forbes, Jenny White, and Carl Brueggen, not necessarily all at the same time), it’s not always possible to tell what’s going on. Some of the tracks feature uncharacteristic clarity, such as “Shacho” with its driving riff punctuated by snips of voice samples and swirling electronics. In spite of the fact that it’s probably the most “normal” sounding of the three albums under consideration here, it’s probably my favorite, the one most worthy of coming back to multiple times. In any case, I wouldn’t recommend listening to all three albums consecutively. It’s great to have this little corner of oddball art-noise exposed and preserved for future generations to puzzle over.