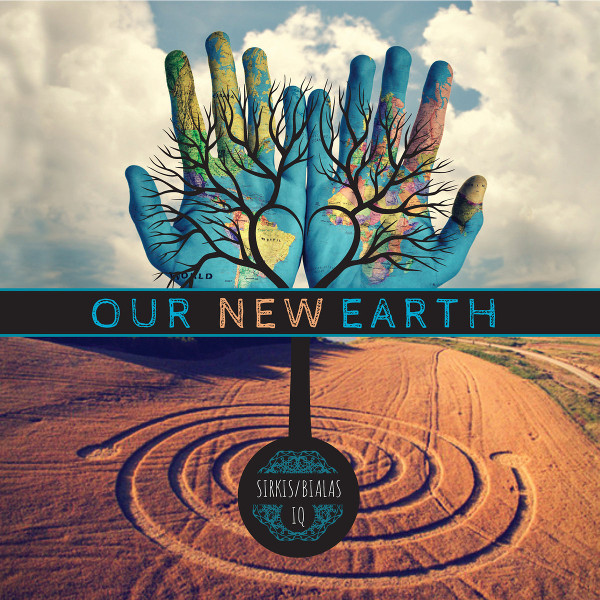 Asaf Sirkis is an Israeli born drummer, composer and bandleader, now resident in the United Kingdom. He has played with Gilad Atzmon and his Orient House Ensemble, his own Asaf Sirkis Trio, albums by Tim Garland, Nicolas Meier, Mark Wingfield, Dwiki Dharmawan, and Dušan Jevtović, as well as The Stone House (with Wingfield, Markus Reuter, Yaron Stavi) and its follow up Lighthouse (minus Stavi), many of these releases have been covered in Exposé in recent years. For Polish vocalist and composer Sylwia Bialas, this seems to be her main gig, also playing waterphone and konnakol vocalizing. The rest of the IQ (International Quartet) includes bassist Kevin Glasgow and piano and keyboard player Frank Harrison. To call the music on Our New Earth ‘vocal jazz’ would be tecnically correct, but somewhat of an oversimplification, as every member brings a rich tapestry of worldwide influences to the music at hand. This is a double CD release, coming five years to the month after their 2014 debut Come to Me, which also featured Harrison, but a different bassist. Within the fabric of their sound one hears the obvious jazz of course, but also Polish folk, modern classical music, Middle Eastern sounds, and South Indian music (most evident on the disc two opener “Rooting,” the amazing eleven-plus minute title track, and “Picture from a Polish Wood,” which use konnakol vocalizing techniques). On “Rooting” she also provides some beautiful overtone singing. Bialas is certainly the star here, her voice is at once controlled and powerful, and at times joyous and acrobatic, sometimes double-tracked with harmonies, but not obviously so. She sings most often in her native Polish, or if not, just wordless vocalizing (scat) which offers a melodic instrument that in jazz might normally be provided by sax or other wind instrument. The amazing disc one opener “If Pegasus Had One Wing, He Would Fly in Spirals” has an overall sound reminiscent of Canterbury artists like Hatfield and the North. Bialas’ voice soars overhead like a soft summer breeze with beautiful harmonies and Harrison’s lengthy piano solo intertwining on “Message from the Blue Bird.” The opening section of “Spooky Action in the Distance” is a wildly eclectic and experimental passage for voice, waterphone, and percussion before the whole band comes in at around the three minute mark. Hardly a moment goes by anywhere across these two discs where the combination of sounds and vocals are nothing short of stunning.