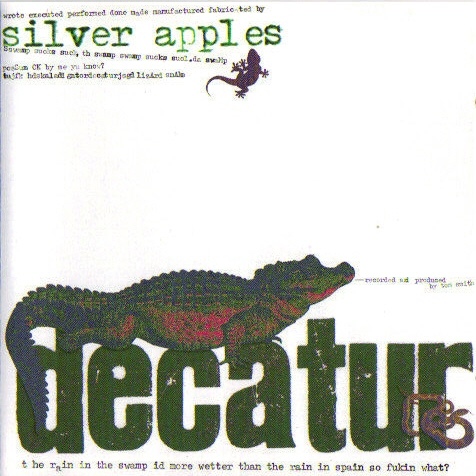 Could this be the soundtrack for an alien abduction? Last year the Apples bounced back with original leader Simeon after almost 30 years, with a new disc Beacon, an album of songs, some more pop, others more experimental, and a few remakes of early stuff, but all holding to the three-to-five minute format. Now comes Decatur, one forty-two minute track of free-form sonic experimentation. Whether this is a one shot or this is the future direction Silver Apples will take, this disc goes to nowhere they’ve gone before, at least in their recorded offerings. Abrasive and irregular sonic textures fade in and out amid occasional percussive sounds, with shimmering high pitched sounds overhead and oscillators sweeping from the horizon. As one might expect in a band with two keyboards and a bank of audio waveform generators, the bulk of the sonic content is electronic, and primitive at that, yet drummer Michael Lerner keeps the project from going too far off the deep end; his carefully placed asynchronous hand drums, bells, and other percussion are the glue that holds this project together. While this writer has gotten a lot of mileage out of this disc, it’s definitely not for the faint-of-heart, and most fans of your typical electronic music would probably find it to be far too abrasive; even Heldon’s Electronic Guerilla seems a little tame compared to this. And while most could probably get into this for a few minutes, the 40 minute track length might be more than most could endure. For those up to the challenge, it’s some great heavy-duty experimentation.