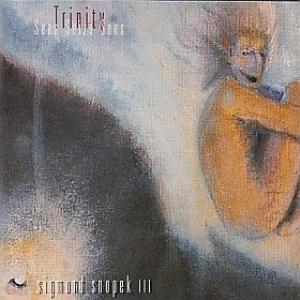 Though best known these days as the keyboardist for the Violent Femmes, Sigmund Snopek’s first and greatest accomplishments have been in progressive rock. A three-act rock opera written in 1973, Trinity Seas Seize Sees was by far this Milwaukee native’s most ambitious work. Only nineteen of its songs got recorded at the time, and only seventeen of those appeared on the 1974 album release of the first act. For various reasons, Trinity drifted onto the back burner, where it remained until Snopek began to breathe new life into it in 1996 by starting to record the remainder of the opera. Completed at last, the opera appears in its entirety on this double-CD set, utilizing both the 1974 recordings and those done in the past four years. Two hours long and comprising 48 tracks, Trinity is a difficult work to describe in a brief review. Partly humorous, partly serious, it presents an interplanetary allegory of freedom, domination, war and redemption that stands halfway between the silliness of Daevid Allen’s “Planet Gong” mythology and the cryptic spirituality of Magma’s Kobaïan cycle. Musically speaking, Trinity’s in the same camp as Snopek’s two other reissues, Who’s Afraid of Virginia Woolf and Nobody to Dream, although comparisons to early Zappa and Aphrodite’s Child are also appropriate. As always, Snopek uses a wide range of instruments and guest musicians to interweave pop, psych, jazz, spoken word, classical, and choral music into a complex, yet seamless whole. The material recorded in 1974 leans in a psychedelic direction; especially on “Waukesha Windows,” which sounds like it came straight from the year 1969. The recently recorded songs, by contrast, have heavy space rock inflections. Still, the whole opera manages to come together stylistically — a true testament to Snopek’s talent as a composer and arranger. As quirky as it is sublime, Trinity Seas Seize Sees may not immediately appeal to everyone, but those who have acquired a taste for Snopek’s brand of prog may well consider it to be a masterpiece.

Birdsongs of the Mesozoic with Oral Moses - Extreme Spirituals – This album is likely to split Birdsongs fans. Some might consider it a brave creative statement while others may see it as a failed experiment. I’m in the first category and in my opinion albums...  (2008) » Read more