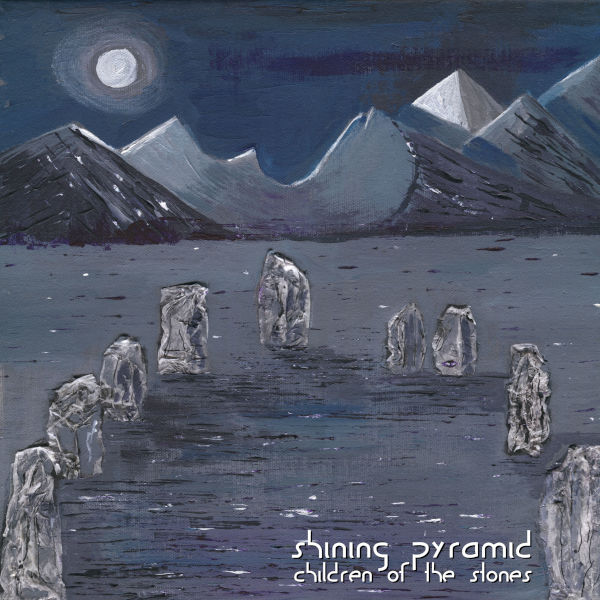 Shining Pyramid is the London-based duo of guitarist Nick Adams and keyboardist Peter Jeal, who play a modern impressionist-based flavor of instrumental progressive rock. Children of the Stones is their second full length release, following an eponymous 2015 debut album. The opening track “Hie Thee Sungates” makes pretty clear that one of Shining Pyramid’s primary influences is mid-70s (Virgin era) Tangerine Dream, a smooth sailing collection of melodic swells and Berlin-style sequences across its near-ten minute duration, the bass riff patterns that underlie the opening section distinguishing it, as well as a more fluent use of guitar, planting its roots closer to the proggy side of the musical universe than ambient or electronica, though the effect remains dreamy and mysterious. Some percussive elements are present, presumably created via keyboards or programmed, but never dominate the proceedings, merely accenting certain aspects. The title track which follows offers hints of another influence, which would be Pink Floyd in their ‘soundtrack’ period (1969-71), though we don’t hear any of the overt rocking that punctuated Floyd’s most powerful work, instead opting for the dreamy aspects only. With “Sun Loose in the Sky” that overt rock certainly does come to the fore, although the drum programs are buried under a strong foundation of guitar fuzz and searing solos, making it quite the psychedelic excursion, though it just repeats the same idea over and over for three minutes. Perhaps the strongest entry from a prog standpoint is the nearly ten-minute “Horses,” beginning with gentle melodic wanderings vaguely reminiscent of the French band Edhels in their Still Dream period, then erupting into a swirling rock maelstrom at around the five minute mark, recapping some of the melodies introduced earlier as aggressive keyboard and guitar solos. Overall, the album is a solid entry in the field of instrumental electronic-informed progressive rock.