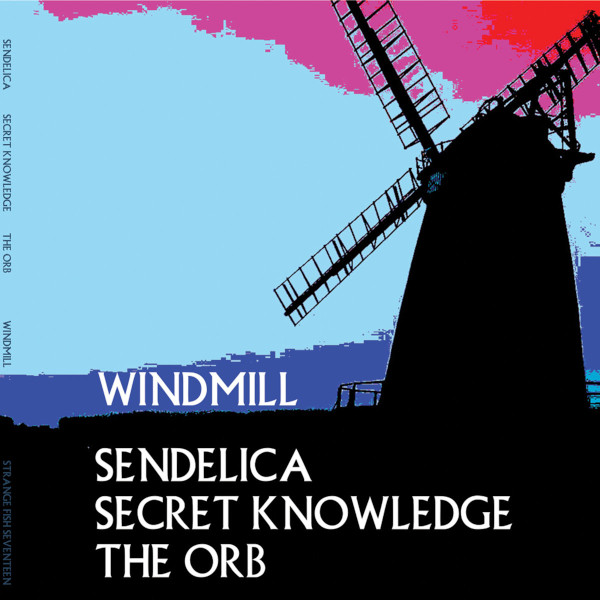 Last Summer Fruits de Mer released a very special one-off 12” single featuring Sendelica, Secret Knowledge, and The Orb, which has subsequently sold out. Sendelica is well-known to FdM fans, but Secret Knowledge is a new name. Secret Knowledge is legendary writer Kris Needs and singer Wonder Schneider (no relation), who recorded some classic house and techno tracks back in the 90s. And of course The Orb aka Dr. Alex Paterson, pretty much invented ambient house at the end of the 80s. Windmill marks a rare collision of styles that turned tragedy into a beautiful eulogy. On June 3, 2018 Kris Needs’s soulmate Helen Donlon succumbed to an illness. Kris was in the process of bringing Sendelica into the mainstream music press and when Peter Bingham heard the awful news, he wrote a musical eulogy and upon hearing it, Wonder called it “Windmill.” On this release, the music has been worked into four separate and distinct mixes: “Consterdine’s Floyd Mix,” “Chocolate Orb Dubbed Mix,” “Consterdine’s Original Mix,” and “Chocolate Orb Chilled Mix.” “Consterdine’s Floyd Mix” is a moody hypnotic piece with crashing waves and Wonder’s deep alto that bears quite a resemblance to The Dark Side of the Moon. “Chocolate Orb Dubbed Mix” is a drifting melancholy mix with keyboards, electronics, and effects sans vocals. “Consterdine’s Original Mix” retains the DSotM vibe, but with cool urban sax that adds some grit to the dreamy soundscape. And the closer “Chocolate Orb Chilled Mix” is a cleaner version of the dubbed mix, while introducing some cyclic and chilly elements. Windmill is an unimaginably beautiful tribute to a very beautiful person lost too soon but alive forever in the music.

Generations of Pioneers Get Together