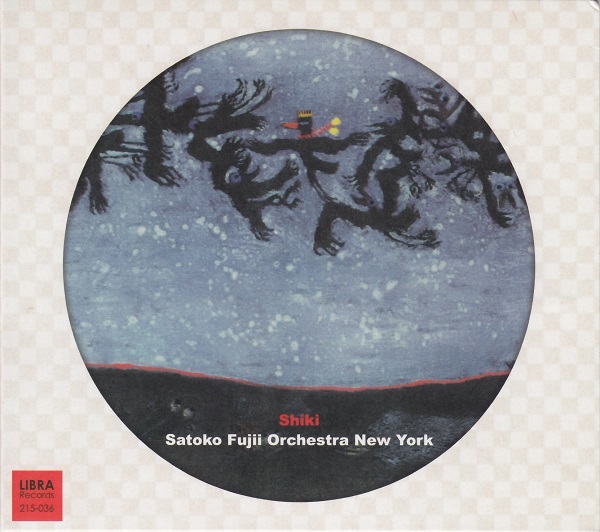 The work of composer and pianist Satoko Fujii comes in many forms, and this is a large ensemble that she maintains for recording projects in New York. The opening title, clocking in at some 36+ minutes is a free jazz magnum opus of ideas exploding outward in every direction, fully composed but with plenty of room for the players to improvise at numerous levels, resulting in an almost orchestral effect going well beyond the standard confines of the idiom. There are a lot of cooks in this kitchen, a group comprised of fifteen outstanding players, including Fujii herself on piano: four trumpets, three trombones, bass, drums and five saxes – two alto, two tenor and a baritone. This all comes together to make for a most potent stew of ever-morphing compositional ideas wrapped in a majestic blanket of alternating aggressive and gentle instrumental approaches, sometimes even narrowing down to one or two instruments working an idea through its inception before it expands out to include the full ensemble. The remaining two shorter pieces include “Gen Himmel,” and orchestral variant of the title track from Fujii’s previous album that concludes with a wailing crescendo of brass ad saxes fading gently into the distance, and the ten-minute “Bi Ga Do Da,” a powerful piece composed by trumpeter Natsuki Tamura, which includes some wild vocalizations as it builds in intensity toward something vaguely reminiscent of a collision between early Magma and Sun Ra. Even if free-jazz is not your thing, this release offers so much more than the standard stock parts, reaching into a well of powerful and unique ideas, keeping it thoroughly engaging over the long haul.