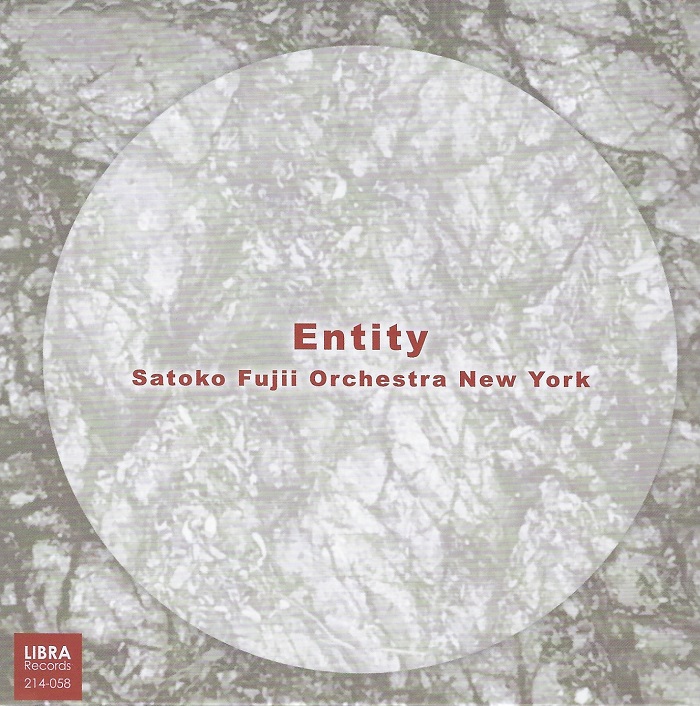 Composer, conductor and arranger Satoko Fujii has several of these orchestras around the world (Tokyo, Kobe, New York, Berlin) that convene periodically to to perform and record Fujii’s music. The last release by ‘Satoko Fujii Orchestra New York’ I believe was her Fukushima album back in 2017, a musical tribute to horrific events of 2011, including the Tōhoku earthquake, its subsequent tsunami, and the resulting nuclear accident at the Fukushima power plant. All of Fujii’s ‘orchestras’ are basically jazz big bands (horns around a core trio) where her duties are strictly composing, arranging, and conducting, but since she has worked with most of these musicians previously (nine of the thirteen members are veterans of the previous edition), she understands how they play, and can envision their sound as she is composing for them, and likewise their playing inspires her to meet that challenge. The thirteen members on Entity include a core trio of guitar, bass, and drums (Nels Cline, Stomu Takeishi, and Ches Smith respectively, plus three trumpeters (Natsuki Tamura, Herb Robertson, and Dave Ballou), two trombonists (Curtis Hasselbring, Joe Fiedler), two alto saxes (Oscar Noriega, Briggan Krauss), two tenor saxes (Ellery Erskelin, Tony Malaby), and Andy Laster on baritone sax. The opening title track starts as a raucus romp centered around drums and guitar, the drums dominating the first couple minutes with the horns in tow, then guitar comes in full power versus the horns, one wild ride to be sure, but then at the eight-minute mark it all ends and the piece completely changes, moving along a far more quiet trajectory for most of the remainder of its near-thirteen minute duration, with one more flare-up near the end. In fact all the pieces here are very long, the shortest being the ten minute “Elementary Particle,” with some others approaching album-side length. “Flashback” begins with groups of horns trading melodic blasts for a couple minutes until the piece settles down, offering the players plenty of room to solo, then goes very quiet and peaceful in the piece’s midsection. One of the most interesting cuts is the closer, “Everlasting,” opening with a crossing patchwork of beautiful slow-moving melodies, where Cline uses a guitar effect to simulate a soprano voice at the one minute mark, then after a minute the piece moves back to subtle conversations among the various brass instruments, then finally onto a powerful melodic conclusion. All taken, it’s an engaging set of composed pieces that reveals something new with every repeat play.