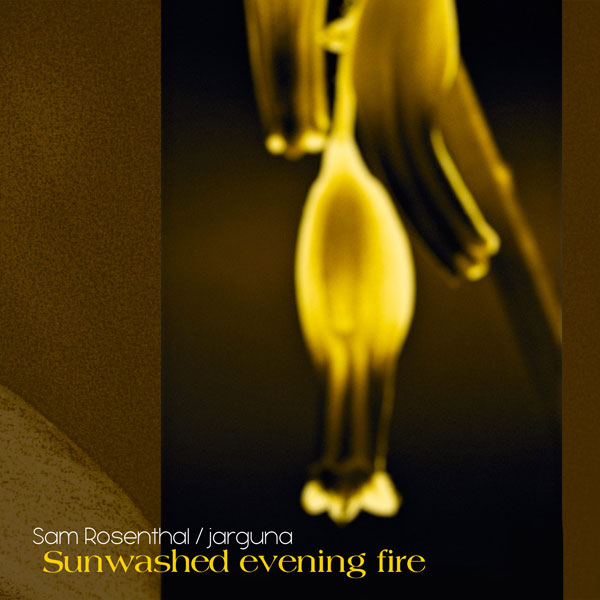 Sam Rosenthal is best known as the founder of Projekt Records, as well as being the main moving force behind the band Black Tape for a Blue Girl since the mid-80s, but his solo work over the years (as well as his alias As Lonely as Dave Bowman) has produced works that are solidly in the electronic and floating ambient realm. Many of his best releases are collaborations with other like-minded artists (Mark Seelig, Vidna Obmana, Steve Roach, etc.). Marco Billi, aka Jarguna, from Florence, Italy is one of those like-minded collaborators who, starting out in 2005 or so, has released nearly two dozen albums – many of them collaborations, and most of them available only as downloads or CDRs. Only in 2019 did he start releasing material via Projekt, with 2019’s Prospettive Animiche. The album at hand, Sunwashed Evening Fire, has been a couple years in the making, collaborating by sending files back and forth across the Atlantic, with Rosenthal doing the editing and processing to produce the album’s flow. There are two lengthy suites of floating ambient sounds, the first is “Evening Market of the Petal Fields,” presented in four parts totaling about 24 minutes, a delicate, shimmering and dreamy journey, abundant with elements of field recordings, nearly fading to black between each section except the last. The third part features some sequenced electronics amid the space drifts, where Norwegian guitarist Erik Wøllo contribites a soaring lead throughout the section’s buildup, crashing into a maelstrom of gloomy darkness punctuated by various found sounds, peoples’ voices, and such. By contrast, the second piece, “Lhasa River Circles the Fading Sunset,” at first may seem a more conventional slab of floating ambient sound, divided into three sections for a total of 27 minutes. The first section presents a dense swath of sweeping, shimmering chords that seem powerfully energized on their own, with many textures flowing under the surface, with a long slow fade leading into the second section, which bears an altogether different character, more colorful and moody, slowly fading into the third part where a deeper, more hypnotic form grows out of the mysterious density. The two lengthy tracks together make for an immersive experience that the listener will want to revisit often.