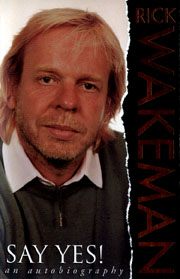 I knew Rick Wakeman had a great sense of humor, but I didn't know he was this funny! Told with a true gift for storytelling, Say Yes! should have all but the most hardened cynics in stitches 'til the cows come home. I read the entire book in one day and had to be practically dragged away on a stretcher from severe abdominal strain brought on by convulsive laughter! With all the down-to-earth candor that truly gives the lie to critical cries of "pretentious," Wakeman can, and does, turn any situation into something funny, as he takes us through the ups and downs of his thirty-year career. And there have been as many, or more, downs than ups for the virtuoso keyboardist/ composer.

His huge commercial successes are set against the harsh tumult of a heart attack at age 25 and two divorces. Highlights of the book were numerous, but my personal favorites were mostly from his days with The Strawbs. The time he threw Salvador Dali off the stage (not knowing who it was) at a poorly-attended circus concert, was a great one. Then there was the experience of being mistaken for Jethro Tull at a roadside diner. Or how about the incident when playing in a teenage rock band in which the drummer, in mid-song ".... broke into a drum solo in a tempo of his own choosing."

Any more references than this would be ruining the fun for everyone who reads it. On the down side, as we come nearer and nearer the present, less and less of the book is devoted to telling the musical part of his career. But I would love to have seen more detailed insight into Wakeman's later, less well known solo work. Still, all told, Say Yes! is a must as an insider's view about Yes, and some of the dark realities of the music business; or for anyone who wants a good honest laugh.