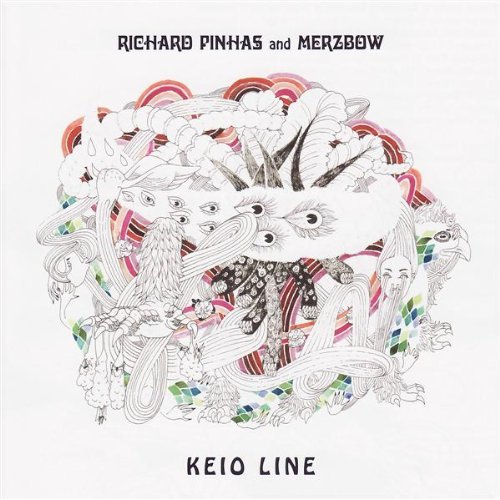 Having redefined the scale of sonic monumentalism with the 2006 two-disc set Metatron, Keio Line cleaves to the opposite – a two disc set of comparatively simple instrumentation reliant upon the real-time reconfiguration of signals. To again borrow from Kurt Schwitters, Keio Line is clearly an audio merzbau, collage-like rambles using scraps of audioforms and phrases generated by guitar with de rigueur pedals, a synth, and the now omnipresent laptop. For Schwitters, "merz" was a contraction of the German word "schmerz," meaning pain. And while the pain here is implicit, never overt, the music is often reassuringly familiar. The signal path – where so much effort now resides – results in a restless sonic amalgam, admirably uncertain, all deftness in the soundstage and still radiant with the digital metaphor of the analog ideal. But set beside other signal paths, this one seems too well-worn. By now one wonders if Pinhas is asking himself even the most rudimentary questions about his approach. While phrases subsumed by reprocessing and laptopification swirl and shudder with unflagging conviction in the pulsing spontaneium, they occasionally surface and are readily recognizable from as long ago as Allez Teia, the Heldon album featuring such loving invocations of Fripp's 70s sostenudo. Keio Line may simply demonstrate that we've lived long enough to cross the generational threshold, innovation now belonging to those born into the digital milieu, not grafted onto it, and consequently being the better suited in surveilling the new terrain.