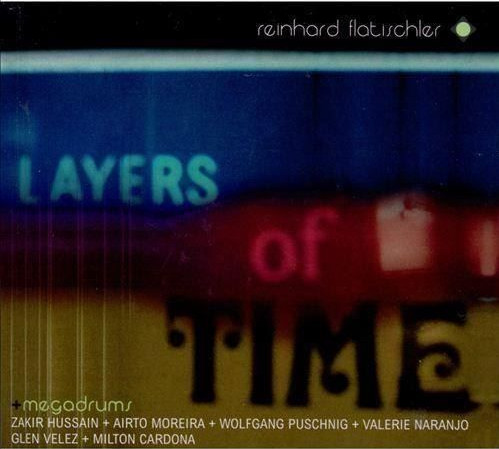 I've never heard of this fine musician before now, but if I had one bit of advice to give him I'd say, "Call up Manfred Eicher, pronto!" This release would fit sparklingly well on the ECM label. In a just world anyway... Band leader / percussionist Flatischler follows quite loyally in Jan Garbarek's footsteps through woodwind player Wolfgang Puschnig. The breathy, wooden tones of his sax and flute command a formidable presence throughout this percussion-drenched holy convergence of jazz and ethnic music. Not since Milton Codona (who also appears on this album) and Garbarek's work, I believe, have I heard so thorough and satisfying a multi-culture cornucopia. Where Codona and their acolytes forge new territory in their kaleidoscopic blend, Flatischler at times veers nigh on quoting verbatim various bits of African or Latin musics. But for every such instance, there is a corresponding piece which defies any attempt to trace its sources. Shakers, marimba, tabla, berimbau, congas, talking drum, you name it; if it can be hit, then it probably can be heard on this veritable paradise of percussion. Who can resist being captivated by the surging tension as flutes and the rich acoustic timbres of the percussion section duel it out? Points of interest were bountiful — I especially liked the quasi-Javanese gamelan they created by using a miscellany of tuned gongs. And give him an extra pat on the back for leaving the bass and keyboards in the studio closet! What with the company he keeps on this recording — Zakir Hussain, Airto, Glen Velez — more melody instruments would almost test one's credulity. A commendable sensitivity to space and color, and an acumen for pacing the whole shebang into complementary movements spotlighting the performers' virtuosity, make Layers of Time one that I heartily applaud.