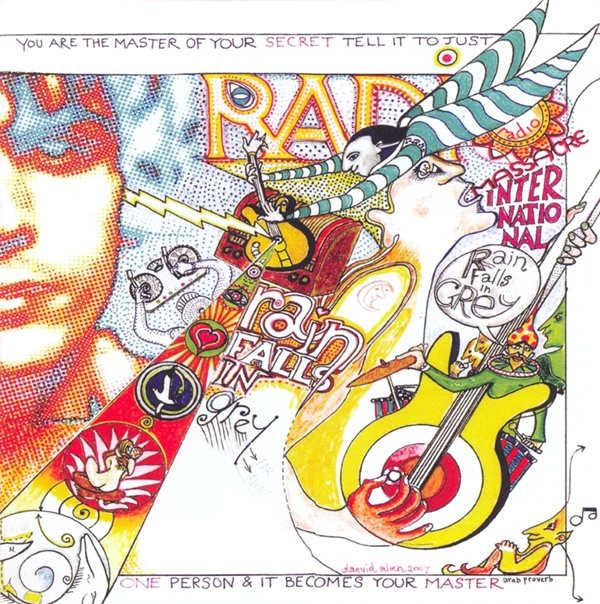 I was initially concerned that my lack of experience with RMI’s back catalog might be a hindrance to writing a useful review. I needn’t have worried, since this release is a drastic departure from the general thrust of their previous work. Far from being another entry into their oeuvre of sequenced electronic sounds, this is a rocking stab into the heart of space rock. As a tribute to Syd Barrett, early Pink Floyd is the jumping off point for a set of tunes both epic and compact, free and composed. The guest players on wind instruments and electric violin add dimensions to the music that, while maintaining a clear connection to their inspiration, even Syd and Co. never dreamed of. The sax work on the title track makes me think of Sun Ra covering “Interstellar Overdrive” – which is not a bad thing at all. Some sequencing pops up from time to time, reminding the listener that maybe the distance between Dark Side of the Moon (post-Syd, I know) and Phaedra is maybe not so far as you would think. I doubt many Exposé readers believe that space rock is a dead genre, but this stellar (pun intended) release is ample evidence to anyone who cares to listen that there’s life in the old starship yet. And given the versatility that is amply shown here, I will be very concerned if I hear RMI’s next album will take on symphonic prog. Be afraid, be very afraid.

Head pixie Daevid Allen’s cover art, featuring a colorful half-toned rendition of Syd Barrett, provides the first clue as to what lies within this jewel case. Call it retro-psych, post-modern psych, psych psych… whatever. I call it pretty damn good. British trio Radio Massacre International are better known for their EM and space rock, though Barrett’s death – days before they began work on the album – forced a course correction resulting in this disk, a sort of love letter to Syd that’s more than just a tribute. Echoes of Floyd circa '67/'68 do poke their heads through the patchouli haze, including nods to “Astronomie Dominie” and “Interstellar Overdrive” within the four-part extravaganza that opens the album and which comes crashing to a close on the succinctly titled “Syd.” It encompasses many classic psych rock trademarks pioneered by Barrett-era Floyd, but also echoing Daevid Allen’s work with early Gong, and even the intense psych rock of early Porcupine Tree. Several tracks are graced by the saxes, clarinets, and flutes of Martin Archer whose playing lends them the same soulful magic that Dick Parry gave the Floyd on their seminal mid 70s albums. The album closes with a spacious and bluesy guitar improvisation by Gary Houghton that is emotionally wrenching and about as heartfelt a musical statement as I’ve heard in a long time. RMI fans expecting more Berlin-school EM may be in for a surprise with this one, but I have a feeling it will be a pleasant one.