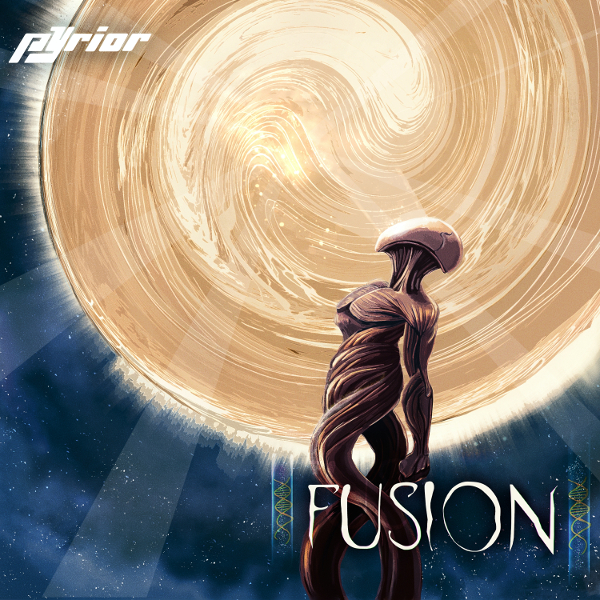 Pyrior is a trio based in Berlin with their own take on psychedelic rock. While heavy riffing could be considered the core of their sound, they take the time to present some acoustic music as well. Fusion is their fifth album, and it’s a fine example of musicians with a bit of a post-rock sensibility for drama playing killer riffs. Judging by the titles of these instrumental tracks, they have a fascination with science, giving us “Adenine,” “Cytosine,” “Guanine,” and “Thymidine” (the proteins that are the building blocks of DNA) along with “Splicer,” “Fusion,” and more. The DNA tracks are scattered among the nine tracks and lean towards the atmospheric and acoustic, with heavy-reverb washes of sound and acoustic guitar. The other tracks are built upon heavy riffs where guitar and distorted bass lock into catchy grooves that should please rockers the world over. Such tracks as “Hellevator,” “Splicer,” “X,” and the rest are chock full of good ideas and variations in arrangement. Guitar takes the lead most of the time, with touches of synthesizers added for color. Throughout, their sense of building and releasing tension is superb, giving listeners interesting journeys whether the album is taken in as a whole or via individual tracks. There are some overdubs to fill out the trio’s sound, but they are unobtrusive, and often the backing for a guitar solo features a heavily distorted bass to compensate for the lack of a second guitarist or keyboards. For what it’s worth, I’ve heard Pyrior compared to Earthless, though I’m not really familiar with Earthless to comment on similarities or differences. Be that as it may, Fusion is a solid album and I can recommend it to listeners who love rock but don’t mind some breaks from endless heaviness.

Moby Grape - Moby Grape, Wow, & Grape Jam – One of the very best of the late 60s San Francisco bands (if not the best), Moby Grape's recordings as well as the band's name itself has long been tied up in endless cycles of litigation thanks to...  (2008) » Read more