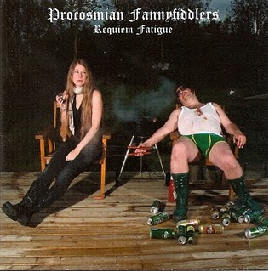 Sweet voices and guitars start off the Procosmian Fannyfiddlers eighth CD, Requiem Fatigue. The band calls their style burlesque progressive rock, and that's pretty accurate. The tales told here are definitely for the over-16 crowd, with lots of lasciviousness and lust, and a good dose of politically incorrect crudity thrown in for good measure. If they put parental advisory stickers on prog albums, this album would qualify instantly. The stories told are dark, fanciful, sexy and at times nearly pornographic. A sense of humor runs through every song, sometimes evident in the titles ("Carpe Scrotum" anyone?). If you're easily offended this is not your territory. If you were amused by the Scorpions' inaccurate use of their English/German dictionary when writing lyrics, then you're sure to be amazed at how this Norwegian septet have a full command of the less-than-niceties of the English language. That aside, the music is interesting and full of solid rhythms, excellent vocals and beautiful instrumentations. The songs tend toward melodic and have a nice depth, with violin and flute coming in over the guitar/bass/keyboard/drum foundation in just the right places. The music is engrossing enough that the lyrics aren't the first thing you notice. After a couple of listenings, though... well, who says music can't be a bit of off-color and still artistically viable? It is here.