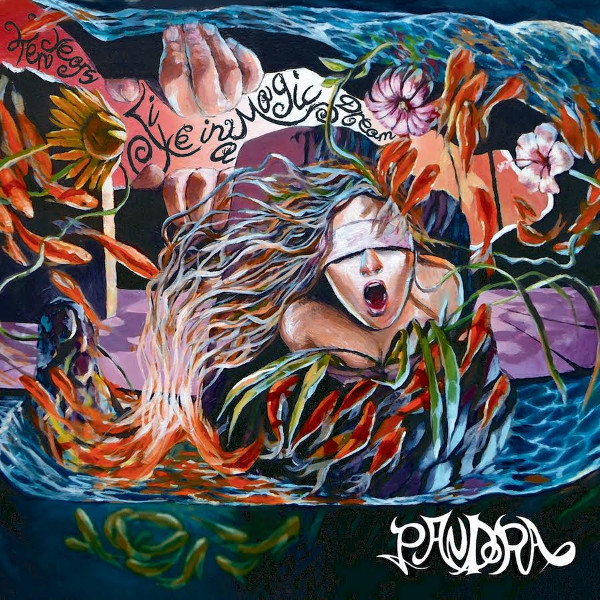 Pandora is an Italian neo-progressive band born out of love for 70s progressive in 2006 by the father (Beppe Colombo) and son (Claudio Colombo) team with Corrado Grappeggia. This trio of keyboards (Beppe); drums, guitars, and percussion (Claudio); and vocals and keyboards (Corrado) released several albums. As they approached their tenth birthday, Pandora expanded to include artist and vocalist Emoni Viruet to release Ten Years Like in a Magic Dream. The album consists of three parts: Fragments of the Present, Temporal Transition, and Fragments of the Past. Fragments of the Present contains four rerecorded Pandora songs sung in English: the outstanding cinematic instrumental “Always and Everywhere,” the superb “The Way You Are” with its keyboards, growling guitar, and driving drums, Pandora’s homage to seeing Genesis perform live “Turin 03.02.1974,” and the symphonic and majestic “Drunken Poet’s Dream,” that bears some resemblance to the theme song from The Last of the Mohicans. Temporal Transition features an inspired cover of Banco del Mutuo Soccorso’s “Canto di Primavera” aided by Banco’s Vittorio Nocenzi (final Moog solo), David Jackson (Van der Graaf Generator), and Dino Fiore (bass player of Castello di Atlante). And rather than try to rival Francesco di Giacomo’s iconic tenor, Pandora treats us to Emoni’s beautiful alto! And the final four tracks “Second Home by the Sea” (Genesis), “Man of a Thousand Faces” (Marillion), “Ritual” (Yes), and “Lucky Man” (ELP) comprise Fragments of the Past. I lost interest in Genesis after both Peter Gabriel and Steve Hackett, left so I am unfamiliar with this song that marked the band’s transition between prog and pop. Pandora does a decent job interpreting this so-so instrumental that would not have been my first choice for a Genesis cover. Marillion is a prog band that never interested me. I am completely unfamiliar with this song so I cannot judge Pandora’s version, though this cover is better than their Genesis cover. Pandora’s cover of “Ritual” from Tales of Topographic Oceans is so good that it almost inspired me to investigate the original. Emoni’s vocals are far superior to Jon Anderson’s tenor. “Ritual, “Lucky Man,” and “Canto di Primavera” are outstanding covers. And Greg Lake’s untimely passing on December 7, 2016 occurred days after the release of “Lucky Man” as their single from the album. Ten Years Like in a Magic Dream is a great album!