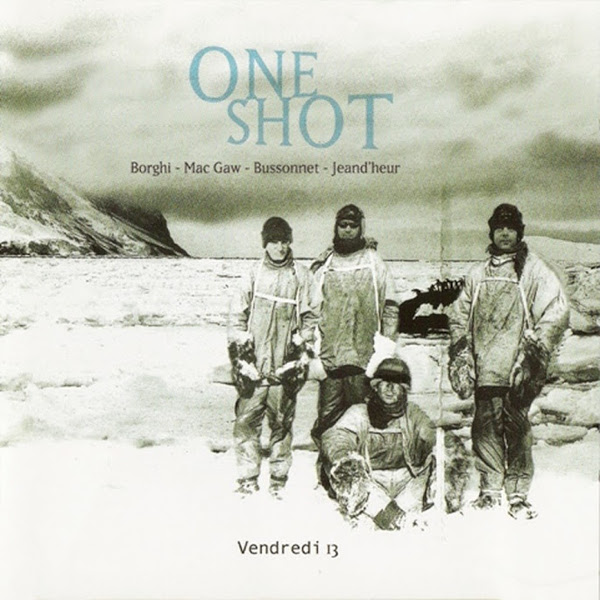 Get in line, put down your money and get yer Zeuhl fix right here. Satisfaction guaranteed. One Shot, featuring Emmanuel Borghi (keyboards), James MacGaw (guitar), and Philippe Bussonnet (bass), all members of the 90s Magma line-up, plus drummer Daniel Jeand’heur, churn out instrumental Magmoidisms that will excite and give great satisfaction to all those who love the legendary French group which spawned Zeuhl music. The music derives from Magma’s Üdü Ẁüdü period with all of the requisite sounds, style, gestures, and more. The opening track features the band riffing on motifs which are inspired by “Zombies.” Borghi favors the Fender Rhodes electric piano with fat, juicy, and weird harmonies, nervous figuration and erratic rhythms. The heavy vibrato and upper register synthesizer of “Blue Bug” is reminiscent of the Moog line at scattered throughout “Tröller Tanz.” Bussonnet has captured the sound and spirit of Jannick Top and Bernard Paganotti. His work is spotlighted throughout in “No.” While it does not focus on virtuoso technique, Bussonnet showcases are more trebly and brittle sound than that of either Top or Paganotti, though when he rips into his instruments, he elicits that famous and devastating buzzing sound that is the calling card of Magmoid bassists. “In a Wild Way” features a tasty bass part that features little strummed chords, as if played on rhythm guitar, and a wah-wah pedal, breaking a bit from tradition. Also, the tune breaks into a straight-ahead jazz fusion passage and even moves into a funk groove, but one with that wonderfully weird Zeuhl component. Additionally, while Magma only occasionally included guitarists, MacGaw’s guitar is in keeping the style and specter of those few guitarists; think of the guitar work by Gabriel Federow on Magma’s live albums. He is a remarkable virtuoso and often playing front and center. While Jeand’heur does not quite imitate Vander’s sound and style, his playing fits in perfectly, full of fire and explosive power. The kicker is that this is a live recording and One Shot proves to be one tight and overpowering group. Stunning!

While this current Magma line-up offshoot began their side career with a fusion album that barely hinted at their Zeuhl progenitors, the quartet of Emmanuel Borghi, James MacGaw, Philippe Bussonnet, and Daniel Jeand'heur have come full circle here on their follow up, entitled Friday 13. This is definitive Zeuhl music — the growling bass, angular melodies, and sprinklings of diminished and augmented electric piano chords. While you could name a lot of comparisons to this album such as Potemkine, and of course, instrumental Magma, the album this piece reminds me of the most is the first album by the similarly inclined Eider Stellaire, although with less compositional restriction. Vendredi 13 was recorded live on that date in April 2001 and features the tremendous playing you would expect from musicians who accompany Vander. The music grooves darkly, with a lot of space for guitar and e-piano solos, and it sounds nicely free, with four out of the six pieces timing at over ten minutes. The particular standout here is MacGaw's guitar playing, and he is given the room to improvise some outstanding solos. All in all, an excellent set of Zeuhlish jazz rock and a no brainer for the fan.

Anyone who has seen Magma play recently has seen three of the four members of One Shot. The leader of the band is Emmanual Borghi on keyboards, and his compatriots are James Mac Gaw on guitar and Philippe Bussonnet on bass. Drummer Daniel Jeand’heur has some very large shoes to fill, and he wisely plays in a lighter, jazzier style that avoids the inevitable comparisons to the intensity of Christian Vander. This five-track CD was recorded live in France on April 13 (hence the title) and it features a band in the process of developing their own identity. Clearly there are Zeuhl aspects to the music, especially in the throbbing bass lines and repeating keyboard patterns (all of the tunes are written by Borghi and Bussonnet by the way). The tracks have a somewhat loose, organic, and improvised sound about them and there are many extended solos. Mac Gaw’s guitar work is quite inspired and it provides some real highlights when the tracks build to a climax. The electric piano is used more in a supporting role than a soloist, but it functions effectively in setting the atmosphere. Overall this is a talented group of players but they are still finding their own compositional voice.