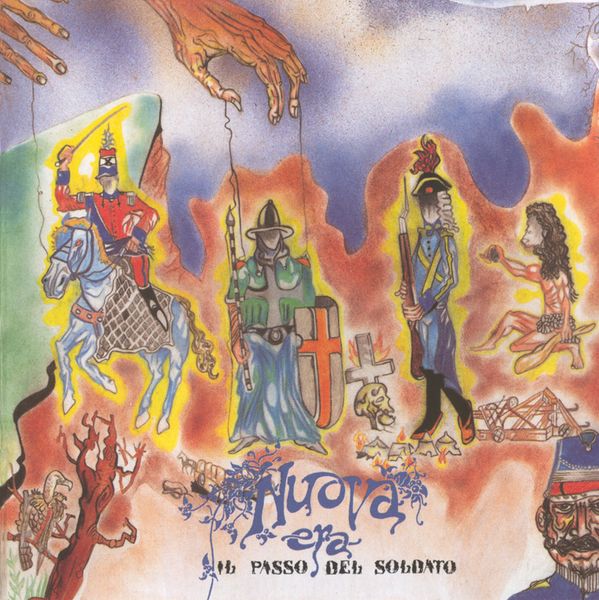 This album could have been reviewed as a new release back in 1976 if it was judged by the musical instruments used to make it. Nuova Era, especially in the keyboard department, sticks to the tried and true instruments of progressive rock — Hammond organ, Mellotron, piano, and ultra fat monophonic synthesizer. And why not? Those instruments have outlived most of the artists who got famous playing them. Nuova Era proves that an interesting album can still be made using the antique instruments. The music is based around a three piece lineup that includes bass, drums, and keyboards. The bass and drum work on the album, the vocals too for that matter, don't really stand out as good or bad. The keyboards are the highlight of this release. Walter Pini really knows how to tickle the ivories (and the plastic). His Hammond work is especially good. It seems that the vocals are less frequent than they really are because of the numerous long instrumental breaks. The vocals are not all that memorable, even though he does occasionally span the entire range of human hearing in a second or so — jumping from low natural voice to high falsetto in the blink of an eye. You must have to be able to do that to obtain your singing license in Italy. Although the instrumentation dates the sound of the material to a degree, the live feel to the album is refreshing. It feels and sounds like they are playing in the same room with you. The music isn't over-produced and slick like the albums of so many other artists today. And did I mention the keyboard player?

Nuova Era are one of the few newer Italian groups performing music in the 70s style of dramatic/romantic/ symphonic rock with strong hints of Banco, PFM, Metamorfosi etc. Their second album, Dopo l'Infinito, turned a lot of heads after its release in late 1989, in retrospect it certainly was one of the best early entries in the modern resurgence. The new album Il Passo del Soldato is their fourth album, three years since their last, and comes after some serious personnel changes. Guitarist/lead vocalist Alex Camiati has left the band leaving quite a hole, as his contribution to the Nuova Era sound was considerable. As the band only decided to replace the vocals, the lack of guitar has made a certain difference in the sound, but the newcomer's strong Alberto Piras (Deus Ex Machina) influenced vocals are a definite improvement on Camiati. Overall, Nuova Era retains the strong melodic feel as on their earlier albums and Pini's keyboard tones have definitely been improved. This album is much like the last couple with these personnel changes and has some very strong moments. Fans of the 70s Italian sound should warm to this quickly, its a great album and certainly one of the best of its genre this year, yet I think some directional changes are in order here for Nuova Era to retain their freshness, keep true to the "Nuova" part of the name, and not remain fully retro.