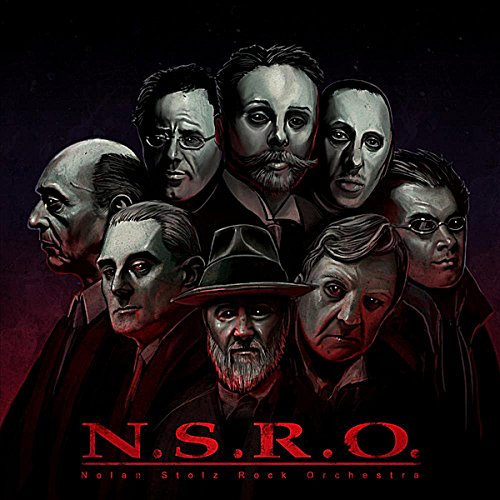 Dr. Nolan Stolz is a music educator, an assistant professor of music at the University of South Carolina Upstate, where he teaches courses in theory, composition, popular music studies, and drum set. The idea of the Nolan Stolz Rock Orchestra was born way back in 1999, first taking shape as a concept and project with members far and wide across the USA, and now, finally with the release of this album, a performing unit has been established in North Carolina to play the music on this disc live, and presumably any further recordings. The music on this release developed over a period of 18 years with a variety of different musicians that were available when each piece was arranged and produced, most from a group of musical associations made during Stolz’ time in Las Vegas, where he was a member of the band Art Rock Circus. Stolz is a multi-instrumentalist, playing piano, drums, keyboards, bass, guitar and on several of the pieces here he plays all the instruments, though on many he has one or more additional players playing instruments that are outside the standard rock idiom (trumpet, cello, flute, clarinet, saxophone, and on the final cut, vocals).

How better to open with than a seven minute abridged take on Stravinsky’s “Rite of Spring,” where Stolz is joined by Richard Forrester on guitar and Gale Winds on flute. On this, and on most of the other classics that Stolz arranges here, one has to believe that his are more respectful of the composer’s original intent, rather than playing fast and loose with the pieces (for example, ELPs Pictures at an Exhibition, or Dave Edmunds shredding Khachaturian’s “Sabre Dance”) and thus the listener can expect something at least a bit closer to the composer’s vision in spirit. Second up is “Introduction and Variations on a 12-Tone Row” by Schoenberg, where Stolz plays all of the parts, which ends up sounding a bit more like a jazz improv than a string quartet. Continuing, a beautiful version of Ives’ “Unanswered Question” mostly for multi-layered keyboards and drums is up next, followed by an outstanding fifteen minute take on Ravel’s “Bolero,” with additional players on cello, flute, clarinet, and tenor sax, it stands strong as the album’s centerpiece. “Diversions for Four” takes Erb’s “Diversions for Two” and adds additional parts written by Stolz, featuring trumpet plus the members of Art Rock Circus on guitar and bass, with Stolz playing drums. Also featured are excerpts from Symphony No. 31 by Scriabin and Symphony No. 61 by Mahler, closing with “The Erlking” by Schubert, with the vocal parts (words by Goethe) sung in German. All taken, this is an ambitious endeavor, but most (excepting the classical purists among us) will probably agree that Stolz has successfully bridged the worlds of classical and rock, perhaps leaning slightly more toward the former.

Motis - L'homme-loup & Live Crescendo – Motis is a talented French group who create what might be called medieval progressive rock. They are deeply influenced by the literature and myths of the Knights of the Round Table, the Song of...  (2008) » Read more