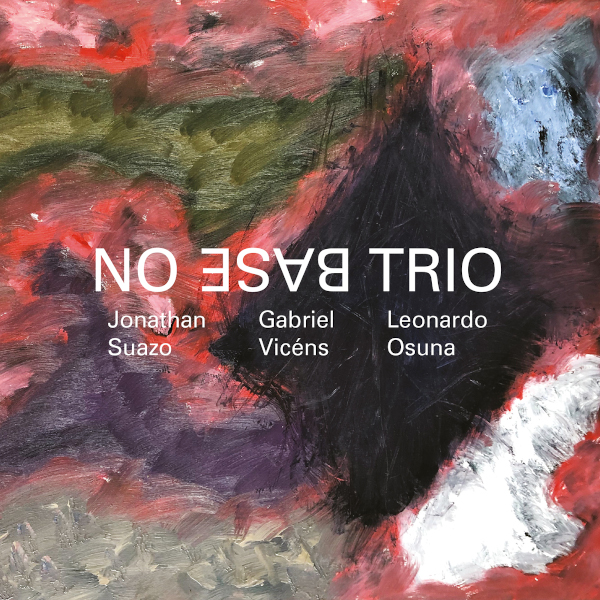 On offer is the debut release by the Puerto Rican improvisational group No Base Trio, a mix of explorative jazz and rock elements, often with dreamy, ethereal moves that lures the listener in further with a combination of melody, rhythm and wide open imagination. The trio has been playing together for ten years, and features drummer Leonardo Osuna, electric guitarist Gabriel Vicéns, and Jonathan Suazo on alto sax and EWI wind synthesizer; the latter as well as a multitude of effects applied to the guitars offer a near-endless palette of sounds to work from in their free-form endeavors. The album, which consists of eight tracks (nine if one downloads — more on the bonus track later) bear unimaginative titles like “EXT – (n)” where n is the track number in roman numerals, was recorded back in January 2020 and released in July, but like the proverbial book, one can’t judge the track by its title, and every piece here offers adventurous perspectives and endless possibilities within their purely improvisational framework. The opening guitar chords on “EXT – I” sound much like an electric piano, done with effects no doubt, and the sax solo accompanying it is quite laid back but powerful, but around the two minute mark Suazo switches to wind synth and all bets are off as the drums slowly enter the picture, providing additional structure as the piece slowly builds to its nine minute climax. A half-minute shorter and a bit more gritty overall, “EXT – II” grooves along with only guitar and drums for the first couple minutes waiting for the winds to join the fun, rocking impressively — this is a far cry from the jazz idiom. Some of the shorter pieces that follow amount to vignettes of ideas that quickly run their course and collapse. The CDs two closing tracks “EXT – VII” and “EXT – VIII” are far more expansive and often dreamy, pushing into free improv territory, not tethered to any recognizable genre for the most part, but full of excitement and suspense. The eight main tracks account for nearly an hour of music, and the best of what’s here, but the download bonus track “EXT – IX” is nearly twenty-nine minutes by itself, seemingly interminable, but there are many interesting points along its extended trajectory nonetheless and offers more of the trio’s dreamy side.