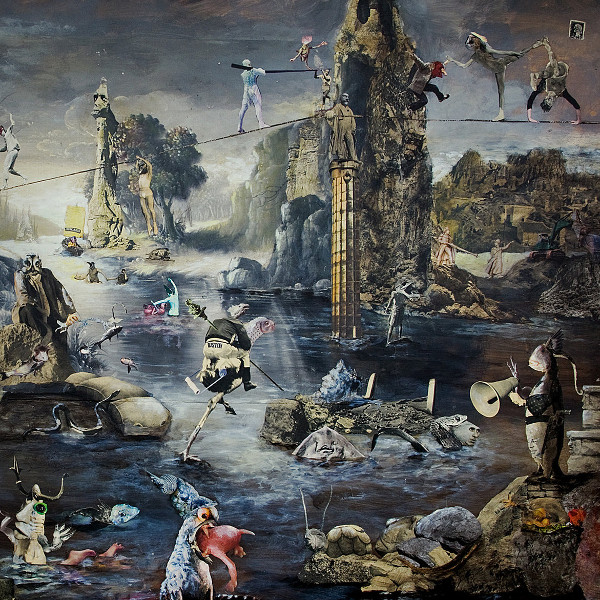 Given all the buzz about the recent release of PinioL’s album, it seems worth stepping back to check out the past work of the “Ni” half of that band — we’ve already covered the “PoiL” half. Stylistically, these two bands from Lyon are quite similar. This is energetic, complex music with an edge of manic insanity that I find instantly appealing, though I suppose many listeners will find it has too little melody or harmony to latch onto. Through most of this album, the intensity is relentless, with little room for breathing. The tracks consists of series of patterns, mostly in odd meters, navigated with great precision but played with such abandon that they avoid sounding slick or over-rehearsed. The key is that Benoit Lecomte (bass) and Nicolas Bernollin (drums) are totally in sync, even when they’re playing parts that seem at odds with each other. Lecomte’s tone is aggressive and overdriven, demanding to be taken seriously, and his parts are usually not doubled by either of the guitars. Anthony Béard and François Mignot usually arrange their guitar parts so they are distinctly separate, not only left-right in the sound but doing different things both rhythmically and tonally. It might be offset stabs accenting different beats of the odd meter, different repeating figures of notes, or a combination of the two. One might be playing something non-tonal — feedback or effects — while the other feeds the rhythm. What you don’t get is anything that resembles a guitar solo. There will sometimes be a pattern that could be said to function as a melody, but aside from messing around with effects, it seems that little of the music is really improvised. There are vocals here and there, either rhythmic chanting or crazed screaming, nothing that could really be called singing. Fans of tricky math-rock should be in heaven with Ni, and even the non-mathematically inclined should be able to enjoy Les Insurgés de Romilly as an energetic set of unhinged musicianship.