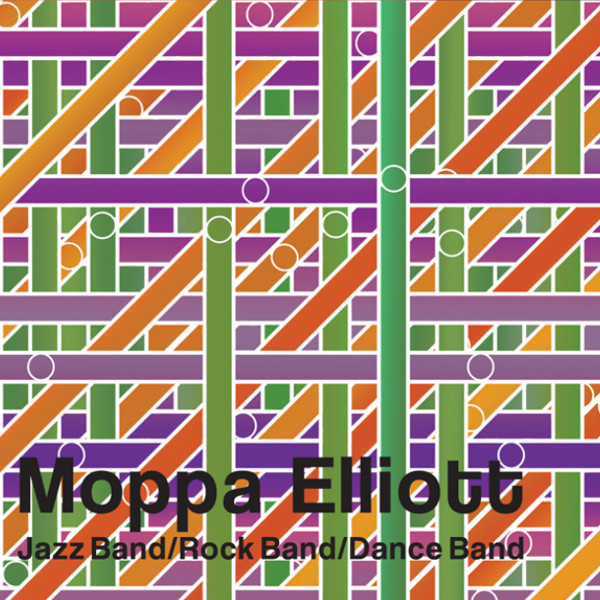 Stepping away from his main band, Mostly Other People Do the Killing, bassist Moppa Elliott presents a three-part set of mostly original music gathered as Jazz Band / Rock Band / Dance Band. It’s essentially a 3LP release on two CDs, with the music divided stylistically and played by three different ensembles, all of which feature the leader on bass. The “jazz band” set is called Advancing on a Wild Pitch and features six tunes which draw from traditional jazz styles and filter through Elliott’s quirky sensibility. The quintet includes piano (Danny Fox), drums (Christian Coleman), bari sax (Charles Evans), and trombone (Sam Kulik), and they all have a lot of fun with the material, sometimes coming off a bit like a Charles Mingus group from the late 50s. Blues and gospel harmonies are never far away, and there’s a lot of swinging going on. Evans and Kulik acquit themselves well on their solos, and the arrangements take advantage of the great range capabilities of both trombone and bari sax. Fox’s piano doesn’t generally stray into too much craziness, keeping in character for style. The “dance band” presents Acceleration Due to Gravity, again six tracks, but these are much more adventurous in sound. The nonet features piano (George Burton), drums (Mike Pride), guitar (Ava Mendoza), trumpet (Nate Wooley), trombone (Dave Taylor), and three assorted saxes (Matt Nelson, Bryan Murray, and Kyle Saulnier). The rhythms for this set draw more from funk than swing, and all the players venture further outside standard harmonies, and Mendoza’s edgy guitar tones provide a chaotic wildcard to the proceedings. A listener might easily be reminded of Frank Zappa’s Grand Wazoo instrumental work. There’s even a cover of Kanye West’s “Power,” with the samples (including King Crimson’s “21st Century Schizoid Man”) replaced by numerous quotes. As an instrumental, it works quite well. Unspeakable Garbage is the “rock band” set, and to my ear is by far the weakest, though it doesn’t quite live down to its name. The band consists of keyboards (piano and organ by Ron Stabinsky), guitar (Nick Millevoi), drums (Daniel James Monaghan), and tenor sax (Jon Irabagon). The harmonic structures for these nine tracks are comparatively basic, sticking with surf and other instrumental rock, often of the corny variety like the clichéd music from a teenage dance party scene in a 60s movie. The only real wild factor here is Irabagon’s sax work, which ventures way outside the boundaries of typical rock sax of the era. His screeches and squawks and wails provide near-constant amusement, though they sometimes sound out of place and fail to make the set work for me. Your mileage may vary. For the most part, I keep revisiting the dance band tunes, which continue to satisfy after repeated listenings.