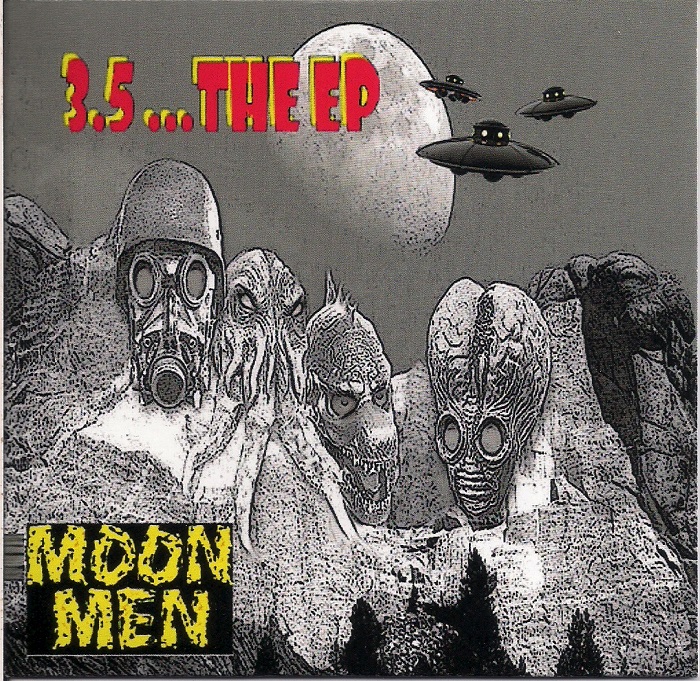 On September 25th of last year, I posted a single review of the second and third Moon Men albums, Uncomfortable Space Probe and the simply titled 3, yet less than four weeks later saw the release of 3.5...The EP, a four-song thirty-minute EP that’s perhaps as long as a lot of full albums from the classic days. Who are these Moon Men, anyway? From the images on their album covers one might get a sense that they are a group of musicians cloaked in anonymity, like the Residents, but in fact that’s not the case – the four members work this project on the side from their other endeavors. Guitarist Bret Hart has over half a dozen releases under his own name, and is involved in numerous other projects, known for his role as an improvisor and avant-garde composer. Sax man and keyboardist Dave Newhouse was a founding member of the Muffins, and carries their tradition on with his Manna / Mirage project, and has his hands in dozens of other endeavors. Bassist Jerry King is probably best known for his project Cloud Over Jupiter, and drummer Bill Jungwirth shares credits on many of the projects by the other three. I detailed The Moon Men process of production in that earlier review, so at this point all that’s left to do is comment on these four great cuts. It seems that their objective here is to explore longer-form pieces rather than their usual three-to-five minute improvs. Of the two ten-minute tracks, “Around the Solar System in a Tub” is a remix of a bonus track on Uncomfortable…, while “Lurching Herman” dates back to before the first album, but it was never completed at that time; it has a very improvised feel but is nonetheless effective, evolving as it goes, sounding a bit like some lost Soft Machine outtake from the early 70s with crazier drums. At four and a half minutes, “When a Loved One Slips Away” grows slowly as it follows a curious path forward, while opener “Waltzing away from a Pickle” proves to be a stranger surprise, apparently something conceived for the third album that wasn’t ready in time. This is definitely Moon Men at their finest, stretching out into longer form pieces; hopefully this is a sign of further things to come.