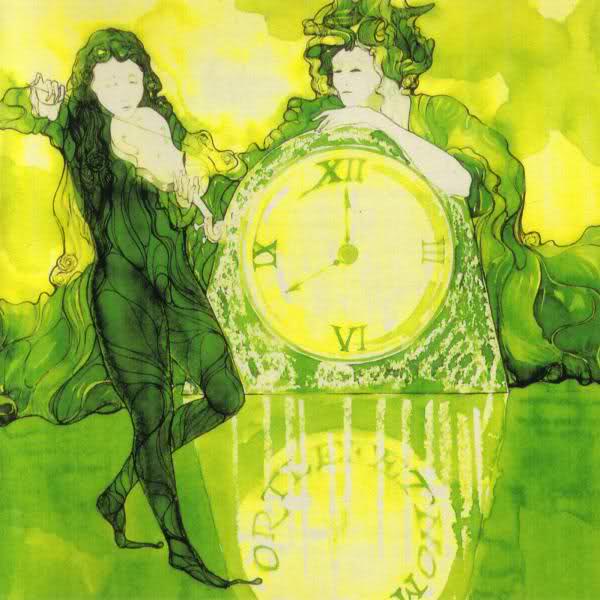 Montefeltro, an incredible Italian duo, writes and plays songs with a symphonic instrumentation that sounds like a large ensemble. Their music and lyrics embody the best of 70s Italian progressive music and extend it into the 90s. Montefeltro’s orchestral sense and Attilio Virgilio’s beautiful operatic falsetto transport you on a fantasy flight independent of the Italian lyrics. Il tempo di far la fantasia consists of five songs that leave you in paradise at the end of the 46 minutes: "Canto #1 (Lettro ad un amico del 1400)," "Il Prescelto," "Cielo di Carta," "La Collana Riflettente," and "Nel Labirinto (Il segreto del sole)". "Canto #1" is a gorgeous 22 minute musical suite about a letter to the Duke of Urbino, Federico de Montefeltro. This suite integrates lyrical and symphonic musical passages with Virgilio’s falsetto that at times recalls Le Orme and Genesis. The shortest song on the CD, "Cielo di Carta (Paper Sky)," at 2:46 is also the best. Its ethereal piano, vocals, and acoustic guitar transcend the other songs. Musea again brings another quality band to worldwide attention.

Montefeltro is essentially the duo of Piergiorgio Ambrosi (keyboards) and Attilio Virgilio (guitars and vocals), with guest musicians rounding the sound out on bass and drums. Their approach is rooted in folk and progressive rock, principally with melodics, dynamics, and simplicity. The music tends to be delicate, atmospheric, and pastoral at times, not agressive. The vocals are very good although on a couple tracks the vocal arrangements seem pedestrian; lyrics are in Italian, and overall the vocals take a back seat to extended instrumental arrangements. For those who need comparisons, Montefeltro might be thought of in terms of two other contemporary Italian bands: Eris Pluvia and Arcansiel, with some added grand symphonics and early-PFM style acoustic textures. Occasionally they sound a little neo-progressive, especially when songs get loud with the sidemen involved (hence the Arcansiel comparison); Montefeltro's most brilliant moments are the quiet and ethereal ones, when the keyboards and acoustic guitars dominate the mix, like on the 22 minute opening track "Canto No.1." In summary, this is a strong album from a band that, like Asgard and Galadriel, is a sure bet to improve with age.