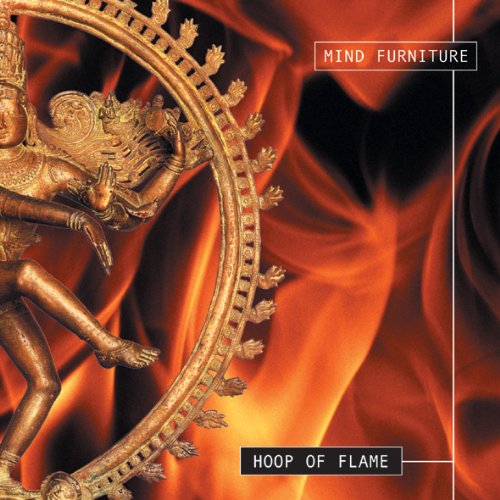 Mind Furniture, a Bay Area band recording their first CD in 2000, is Brett Barnett (keys), Bill Estes (guitars), Paul Harrison (bass), John Mabry (vocals and acoustic guitar), and Greg Miller (drums). Hoop of Flame is their second release, which took them six years, largely because Bill cut his hand with a power saw, requiring nerve surgery and physical therapy to relearn the guitar. This CD is a testament to his talent, determination, and character as his guitar pyrotechnics have not suffered. Hoop of Flame consists of two thematic pieces, each divided into five parts: “The Trial” and “Hoop of Flame.” “The Trial” is about the peoples of the Earth raging against God and putting him on trial. Hard to say where the band is on this subject as the lyrics end without any resolution. “Hoop of Flame” is a meditation on Kierkegaard’s three stages of existential awareness sandwiched between two hymns to Shiva. Both pieces concern a search for the meaning of life. If you can transcend these philosophic messages, you will enjoy the music, which is a combination of 70s and neo-Prog, with some Krautrock references thrown in (e.g. Jane). Sadly, the cover art is awful, giving the CD a cheap New Age appearance that is not at all representative of the music. In fact, if I had seen this CD in the store I would have mistakenly rejected it. So, buy this CD, ignore the artwork, and just mellow out to the great music.