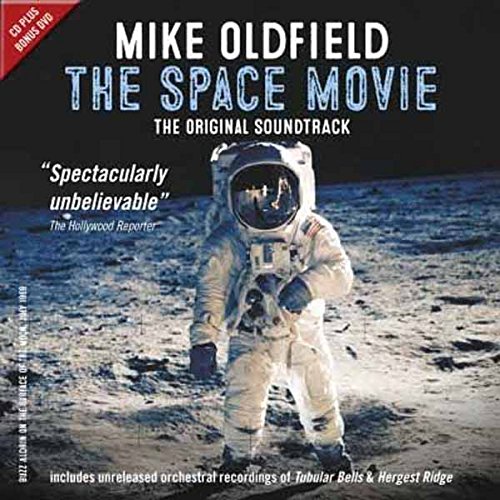 Some movie soundtracks work as free-standing music apart from the visuals, but there are others that are so integrated with their movies that taking them out of that context doesn’t provide a satisfying listening experience. Given the history of Oldfield’s music for The Space Movie, one might expect that it would work well on its own. The history goes like this: by the middle of the 70s, America’s interest in space exploration was declining, sagging from the high of the moon landing in 1969, and NASA officials were looking for a way to revive some enthusiasm in the public (and elected officials), so they hit on the idea of a documentary film celebrating the great achievements. They chose British filmmaker Tony Palmer, who had recently done the series All You Need Is Love: The Story of Popular Music. NASA gave Palmer access to all the film footage they had, much of which had never been seen by outsiders, as well as all the audio recordings of astronauts’ conversations with Ground Control. When considering what music to use, Palmer thought of Mike Oldfield, and since he knew Virgin Records head Richard Branson, a deal was struck. Palmer got to work stitching together a history of space travel up to that point, also bringing in some archival film of early attempts at flight – you know all those amusing pictures of early flying machines falling apart. As time went by and the film took shape, Palmer began to wonder what kind of progress Oldfield was making on the music, and a meeting was arranged. Oldfield presented what he had – less than ten minutes of music for a film that was 80 minutes long and approaching a deadline, since it needed to be out for the 1979 ten-year anniversary of the moon landing. Palmer presented his concerns to Branson, who arranged with Oldfield to use some already existing music that had never been released, namely the orchestral versions of “Tubular Bells” and “Hergest Ridge.” These had sat in the vaults for years because Oldfield wasn’t happy with them. And that’s what ended up in The Space Movie. Watching the film, included in this new release, is a fun experience for a long-time space geek. There’s so much outstanding documentary footage of all that went into sending Apollo 11 to the moon, the years of R&D, the failures along the way, the technical wonders, that it’s hard not to be awed. The film has almost no narration, instead relying on recorded voices from the times, starting with President Kennedy’s promise to land an American on the moon, to engineers, astronauts, and so on. I only have two complaints: first, many of the pieces of film are presented out of context, un-captioned, and out of order, so while the progress of increasing accomplishments is clear, the history itself is a bit mixed up; second, the launch of Apollo 11 itself is shown in slow motion from so many different angles that it takes up more than ten minutes to cover something that happened within a couple of minutes. Oldfield’s music is well-utilized, with edits of the original pieces chosen to match the mood of the visuals. It’s a little odd hearing familiar music being used in this way, especially the opening part of “Tubular Bells” which is so associated with The Exorcist, but it’s also really nice to hear something other than heroic Wagner ripoffs to accompany space footage. There’s enough stylistic variety in Oldfield’s music to suit a wide range of situations, even though it’s all recognizably Oldfield. To return to my original observation, some soundtracks might not work as audio-only works, and I think this is one such case. The audio CD is simply the audio track from the film, including all the voice clips, which makes for a very strange experience. The music is generally quieter than the voices, so the overall impression is a sort of audio collage. But the package is certainly worthwhile for the DVD portion, and should appeal to fans of both space exploration and Mike Oldfield.

Stinkhorn - Altered Takes – In anticipation of their appearance at the Progman festival in Seattle this summer, Stinkhorn have put together this little teaser of a CD. It contains early versions of two of the highlights of their...  (2002) » Read more