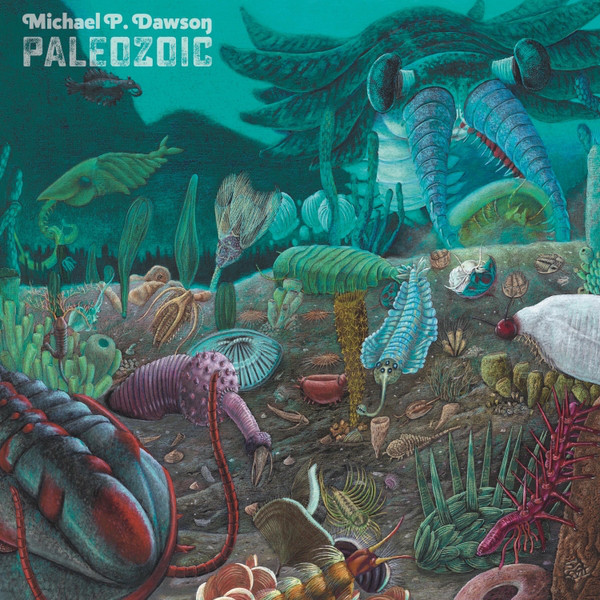 The Paleozoic Era is one of the most important periods in planet Earth’s history, beginning around 550 million years ago, when, due to a slowing of geologic activity, the oceans had cooled enough to support the development of more complex lifeforms. The earliest Paleozoic period, the Cambrian, withessed an explosion in the numbers and varieties of plant and animal life, mostly undersea at the outset, simpler animals began to evolve, and armored shellfish called trilobytes, like the one depected (in fossil form) on the back cover of Bay Area composer Michael P Dawson’s latest album became dominant, then coral, mollusks, and primitive fish appeared, eventually developed bones and the means to find their way out of the water and onto land as amphibians and the earliest reptiles. Dawson has chosen this evolutionary period as the underlying theme for his latest release, Paleozoic, which is only his third physical release in 22 years, available as both an LP or CD (although much more of his work consists of single track downloads accessible only from his website).

Part one (or the A side of the LP) consists of five instrumental tracks that fall somewhere between modern classical, progressive rock, and electronica. The opener, “Extinction Event” (which would be at the very end if this were presented chronologically), features an undercurrent of electronic rhythms enhanced by conventional instrumentation, all played by Dawson (who is credited with concert and bass flutes, soprano and tenor saxophones, bass clarinet, guitars, lap steel, glockenspiel, synthesizers, electronics and virtual instruments). The second track is a busy one, “Herrings and Ingrids” takes a nearly 100% programmed approach on virtual instruments, somewhat reminiscent of Zappa’s Jazz from Hell. The mighty “Dimetrodon” comes next, the first of the great land dinosaurs (the one with the big sail on its back), and Dawson does it great justice with bizarre overlapping programmed drum rhythms that don’t seem to be quite synced up, a great effect for sure, covered in heavy keyboards, flute, guitar and trippy electronic samples. “The Heaventree of Stars” evolves over keyboard figures in electric piano and glockenspiel, with woodwinds carrying a memorable melody until we hit “Bone Wars,” a piece that again relies on a strong programmed undercurrent with a skeletal melody (no pun intended) presented in several electronic voices, later joind by some real live saxophone. Part two (or the B side) takes a very different approach, moving into more dark, abstract, and atmospheric works, far more ambient and relaxed than the first half. On these five tracks, one gets a sense of the primitive oceanworld that is depicted on the painting by Mike Menasco on the front cover of the album, or some primitive forest teeming with mysterious animal and insect life. I find the second half far more engaging and enveloping that the first, with curious twists to be found around every corner. But that’s just me. That said, there’s something here for everyone.