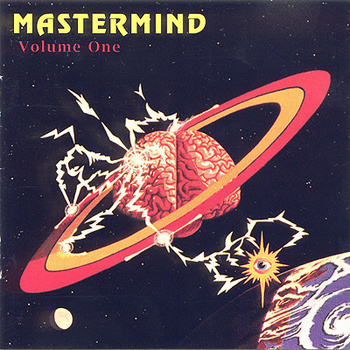 Ten years after it was recorded and released as a cassette, and about six years after its original CD incarnation on ZNR records, Mastermind's debut is finally available once again. It establishes many of the surviving aspects of Mastermind's current sound, that furious fretted firestorm that can fool the listener into thinking "Hey, that's a great keyboard player," through the use of guitar synths with keyboard-type effects, and the powerhouse "blow out the main transformers" approach to classical-type themes in a rock format. Mastermind's ideals were (and still are) set primarily by a rock base firmly rooted in the late 60s and early 70s, before the heyday of so-called 'progressive rock.' Not constrained by the limitations of such labels, the band moves freely between the poles of the rock idiom. Certain tunes like "Long Distance Love Affair" and "Eye of the Storm" weigh in on the more accessible side of the scale, the latter could be a cross between Van Halen and ELP if it weren't for Berends' tenor crooning. Others, like "Fanfare" dial into a more classical-rock style. "On the Wings of Mercury" is a four-minute hard fusion fireball that incinerates everything in its path, while the closer "War Machine" hints at what was to come on Volume 2. For this reissue, two bonus tracks have been added, both recorded a few years after the other material, both vocal tracks in the four minute range. Is that Billy Idol's voice guesting on "Reach for the Sky"? Mastermind's debut still stands strong today a decade after its original release.