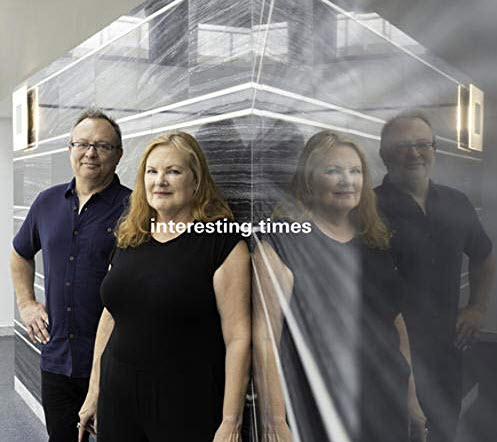 Swiss born, New York based percussionist Mark Wagnon should need no introduction to long-time readers of Exposé, but since this is his first release in almost ten years, all should know he has a long history as a member of some of the finest bands around New York City area, including Tunnels with Percy Jones, Brand X, and Doctor Nerve before that. Interesting Times is Wagnon’s fourth solo album on his own Buckyball label, on which he composed all of the music, played vibraphone throughout, and drums on four of the album’s eight tracks, six of which could be considered vocal jazz, and feature gifted singer Sarah Pillow, who crosses numerous musical boundaries with her jazz quartet, her group Nuove Musiche, and her early music ensemble Galileo’s Daughters, plus she has featured on previous Marc Wagnon albums, as he has on hers, and on the album at hand, where there are lyrics, she wrote them or had a hand in writing them, and their creative muse fuses seamlessly The rest of the players are all top-shelf, including tenor saxophonist Maria Grand, much credited trumpeter Tim Ouimette, alto saxophonist Kevin Oliver, trombonist Kevin Moehringer of Breakdown Brass and a multitude of sessions, guitarist Van Manakas who played with Scott Cossu on several of his Windham Hill era albums. There are several different exceptional bassists featured, and on the tracks where Wagnon doesn’t drum, the featured drummer is John O’Reilly Jr. One of the album’s two instrumentals “Heliopause” occasionally reminds me of early-70s Zappa — the entire band is on fire. The lyrics cover a number of subjects, from the Drake equation (“Proxina Centauri”) to ancient Egypt (“Hypatia”) to more conceptual tunes like “In Our Minds” and “This Moment.” The opening cut, “Synergy,” features singing and spoken parts, plus a spoken clip from Buckminster Fuller; while I’m not a big fan of spoken words over music, this one seems to work and has a lot of good things to say. The instrumental closer, “Lightning Strikes Once,” is a gently laid-back funky piece that gives the horn section and Manakas plenty of space to stretch out, plus a beautiful vibraphone solo. All taken, Interesting Times is another superb offering by Marc Wagnon and friends.