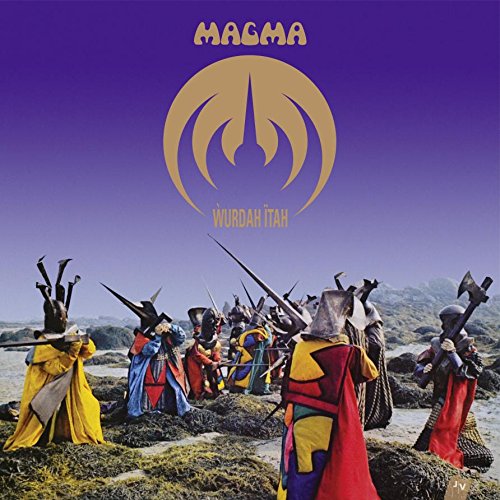 This stone classic of the Magma canon was originally released in 1974 as a Christian Vander solo album, with members of Magma participating, as a soundtrack for the Yves Lagrange film Tristan & Yseult. One day I hope to actually see the picture; with a soundtrack like this I can only imagine how strange it must be. But back to the music at hand… This is classic Magma even if it only involves a small set of players, and fits nicely between the more robustly arranged MDK and Kohntarkosz, which bookend it chronologically. It is in fact, Magma at its essence. The twelve tracks here are organized into two lengthy suites, and offer the listener all the rhythms, melodies, and repetitions of the classic zeuhl style using only drums and piano (Vander), bass (Jannick Top), and percussion (Klaus Blasquiz), along with the powerful and rhythmic voices, harmonies, and choruses (with Christian Vander, Stella Vander, and Klaus Blasquiz all participating). The overall sound throughout is a bit more gentle, melodic, and harmonically complex than earlier Magma releases, as well as being a bit more rhythmically challenging, shifting around with regularity, and the leaner lineup only accentuates the beauty of the band's core sound. In this new expanded edition, we get an early alternate version of the epic, Wurdah Ïtah in its infancy, recorded in January 1972 by a slightly different lineup, with Rene “Stundehr” Garber singing in lieu of Stella, and Jean Pierre Lembert on bass instead of Top. It’s somewhat shorter, at only 25 minutes, and a bit more vocally manic, but it’s all there (some of the Kobaïan lyrics vary slightly from the definitive version), and it’s clearly an important and immensely enjoyable recording that I’m happy was included in this latest reissue. And, of course, it is finally officially a Magma album.