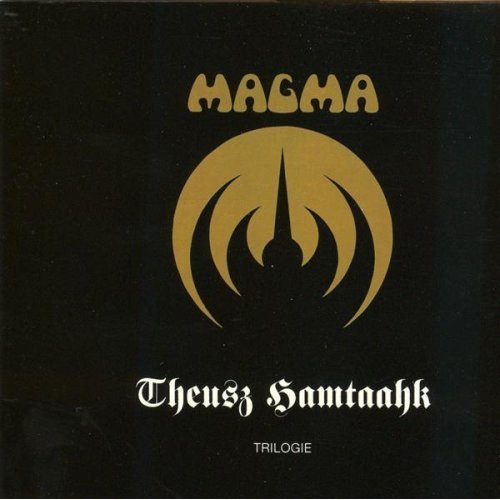 I have a pet peeve (or perhaps a blind spot depending on your perspective) about reunion bands (or tribute bands). You tell me that some great from the 70s is touring with only one or two original members and my eyes will instantly glaze over, more times than not it just won't be the same, especially the energy of it, or the sonics and atmosphere. By the mid 80s, Magma had turned to soul music and incorporated it into their sound and while it was an interesting experiment, it wasn't a particularly successful one. During the same decade Magma was operating more under the offshoot groups like Offering, and they seemed like a host of other groups well past their sell by date.

But then the 90s hit, the reissues started up, and Christian and Stella reformed the band actuelle with a group of young musicians. And it didn't just end up with a tour, Magma became a real force again and has been ever since, in a way shoring up all the missing pieces from the classic years, putting them back together, releasing studio albums from old compositions, and working them all out in a live context, with a lot of documentation to follow. But really the first of the band's major efforts in the new context was to put together the Theusz Haamtahk Trilogie as a full work. Before this, "Theus Haamtahk" itself had only shown up on a live album, "Wurdah Ïtah" had been released under Christian Vander's name, and really only "Mëkanïk Dëstruktïw Kömmandöh" itself was fully realized as a Magma studio record.

This glossy box set, as well as its DVD accompaniment, was really the new band's return to form, and these live recordings were a testament to one of music's most successful reunions. While Magma had matured beyond its youth and perhaps lost a slight touch from their 70s intensity and virtuoso line ups, they had also gained a great deal of maturity and depth. (Analogous to this would be comparing McCoy Tyner's sound in the same era compared to his work with Coltrane or in the 70s.) The vocal arrangements in particular became a bit more approachable and the jazz pedigree of the musicians a little more obvious. And most importantly there was no move away from the essential organic nature of the band's sound, no overt move to a more digital sound or drum gating, metal guitars etc. You could put a 90s Magma album next to a 70s album feeling completely justified. And even more amazingly, this was only the beginning of this era.