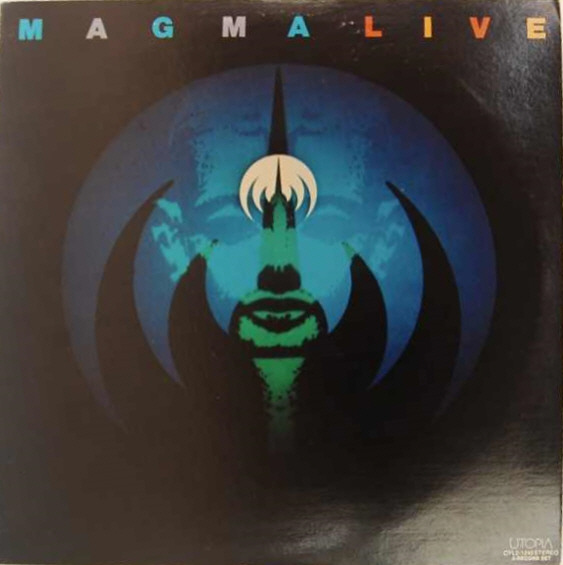 This post will be umlaut free for efficiency. Hhai Live is the top Magma on my list if for no other reason than it was probably the first one I could sink my teeth into. My first actual Magma was the studio album Kohntarkosz which I later grow to love but found impenetrable at first. In fact my opinion remains that the band was pretty much always better on stage than in the studio, like any good, essentially, jazz band is. Magma was always a true original even from their debut but by 1975 I think it's fair to say that the sound had taken a slight turn to fusion, if only because the great violinist Didier Lockwood was in the group and certainly because the genre was in full flight by 1975. And so the studio pieces started to grow in length in areas to give the soloists time to jam a while. And the jams on this are astoundingly great. The album is dominated largely by music from their third and fourth albums but there's some excellent new material as well. It was nice when I finally got to see Magma to see them actually perform "Hhai." Is their best live album? Hard to say anymore, as Magma has to be one of the few bands who have managed to reform and be just as good and sometimes even better than they were in the 70s, and there's lots of great documents to show for it. But this one's like returning home.

1975 saw several personnel changes in Magma's lineup, but the instrumentation which recorded the brilliant Köhntarkösz remained virtually unchanged, only adding Didier Lockwood on violin. This ensemble recorded what is generally considered Magma's strongest, most diverse, and most impressive album. The double live record contains versions of six of Magma's most appealing works, infused with even more drama, emotion, and dynamics than the studio material. An awe-inspiring full-length rendition of "Köhntark" opens the album, following the studio version closely but opening up in the second part for a frenzied violin solo from Lockwood and a short bass solo from Bernard Paganotti. The piece culminates with a rousing choral climax replacing the slower, darker conclusion to the studio recording. A new track, "Hhaï," follows, featuring a bright, optimistic repeating electric piano figure which accompanies the melody, stated through Klaus Blasquiz's inspiring vocal gymnastics and Lockwood's supple violin. The piece opens up for some electric piano soloing and builds to another dramatic vocal conclusion. Vander significantly rearranged the opening track from Magma's first album, "Kobaïa," to construct the next piece. With a prominent bass line and syncopated electric piano chords, "Kobah" has a flowing, laid-back funk feel to it, incorporating some tight violin and guitar fills. "Lïhns" is another new track, a peaceful, celestial, hymn-like piece with gentle vocals lilting over a delicate electric piano figure. The album closes with the second half of a "Mekanïk Destruktïw Kommandöh" performance, beginning with a short, violent bass solo and a soaring violin solo before proceeding into the dramatic finale. This live version omits the closing choral coda. The Seventh CD release of Live also includes two extra tracks. "Da Zeuhl Wortz Mëkanïk" immediately precedes the "Mekanïk Destruktïw Kommandöh" excerpt, effectively capturing about two-thirds of the full piece. "Ëmëhntëht-Rê" is another new track which begins with a haunting choral melody, leading into a rhythmically augmented variation accompanied by a repetitive violin, bass, and high-hat groove.