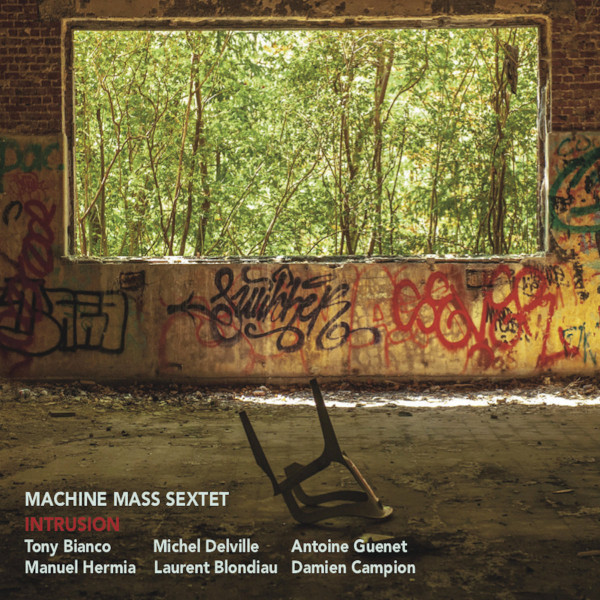 Intrusion finds the core Machine Mass duo of Michel Delville (guitar) and Tony Bianco (drums) joined by two members of The Wrong Object — Antoine Guenet (piano) and Damien Campion (bass) — along with Laurent Blondiau (trumpet) and Manuel Hermia (saxophones). Together the sextet tackles eight tracks recorded live in the studio, including two well-known jazz pieces. John Coltrane’s “Africa” starts out the set in a wonderful fashion, with Hermia on soprano sax; Hermia, Blondiau, and Delville play the melody in unison over Campion’s upright bass and Bianco’s loose drumming while Guenet provides sparse chordal backing. Harmia’s solo captures the Coltrane spirit on soprano, avoiding the sweeter, smoother tones often heard, and Delville contributes some creative and unconventional accompaniment. The guitar continues in this manner as Blondiau takes over the lead, and finally guitar gets a solo, which ventures pretty far outside traditional jazz idioms, with extensive use of the whammy bar and wah-wah pedal. Not what you usually hear on a Coltrane track, but it works well due to Delville’s creativity. Josef Zawinul’s “In a Silent Way” is given a similar treatment as the last track, though it is much freer in nature. The remaining six tunes — three credited to Delville, one each to Guenet and Campion, and a full-group effort — touch on comparable sounds, ranging from free improvisation to moody chromatic melodies, but nothing really approaching rock in style. “Not Another Loud Song” is a highlight, starting out in free-floating mode, then developing into a jazzy groove in seven that comes off a bit like a long-lost Nucleus track done with upright instead of electric bass. “ED” is another winner, and features wah-wah trumpet along with some great guitar work. Intrusion stands as a great jazz album from start to finish, worth a listen for any fan of adventurous music.