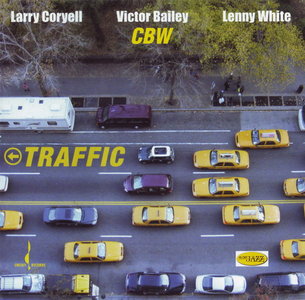 These seasoned players need no introduction for any chemistry coaxed from old bottles. The nucleus of this power trio of Larry Coryell (Eleventh House), Victory Bailey (Weather Report), and Lenny White (Return to Forever) lies in a non-starter session for the guitarist that resulted in one of those “sums being far greater than the parts” scenarios after a few phone calls to use paid-for studio time. It’s not all fusion chops here though, as the three can easily gravitate into that mode without much nudging. Their ideas for covers are mostly non-standard with a slow blues rendition of Wayne Shorter’s “Mysterioso” that really comes into its own. Hendrix’s “Manic Depression” is a clear nod to that icon that comes off better live rather than this studio rendition, although White’s drumming is on target. New pieces include “Joyce’s Favorite” which is a quiet moody blues motif for the group while Bailey steps out on an emotive solo with Coryell’s acoustic playing adding the right backing to an ever-so-slight high-hat and cymbal ride. “Drums and Bass” is plainly that with White and Bailey setting up a simple strut for Bailey to do a sneaky swing move keepin’ it real. “Overruled” could have easily been out of the Eleventh House songbook and compares to Gary Boyle’s underappreciated Electric Glide with the guitarist giving one of his best out and out tasteful playing. Given this premise it’s clear why it’s so rewarding to hear players of this caliber out still making music, confirming what’s it’s always been about.