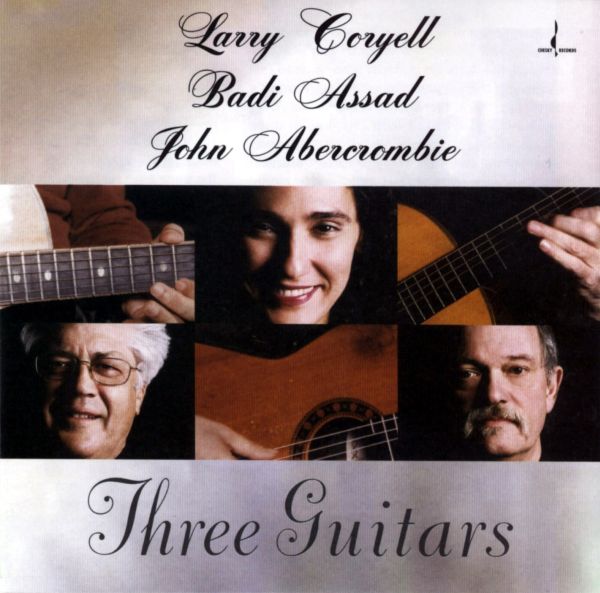 Larry Coryell and John Abercrombie have long been at the forefront of international jazz guitar, utilizing both acoustic and electric formats. Badi Assad is a Brazilian ace performer who had not previously worked in jazz, but you certainly can't tell by the sympathetic results here. At times some of the combinations of work reminds of the best of Ralph Towner's ECM recordings with Abercrombie as on "New Lute Prelude." There is an admirable restraint to the overall tone of the thirteen tracks when compared to recordings by The Guitar Trio (McLaughlin, Di Meola, De Lucia, which has also included Coryell at times). So it's songcraft that shines as well as guitar chops on Assad's moody trio piece, "After the Rain." Another of her moody modal songs, "Metamorphosis," is a perfect foil for Abercrombie to create a friendly interplay against Coryell's bluesy soloing. Plus the positioning of the players within stereo playback is distinct enough to clearly pick out Coryell on the left, Abercrombie on the right, with Assad in the middle. Of Abercrombie's four pieces (including a re-work of "Timeless"), both "Descending Grace" and "Soundtrack" evoke a strong link to the Batik album with Coryell filling a similar role to Towner's. Assad's role on former is to add mouth rhythmic accompaniment that more that fits the bill. In closing, musical meetings such as these provide many fruitful interactions with tentative plans for a follow-up.