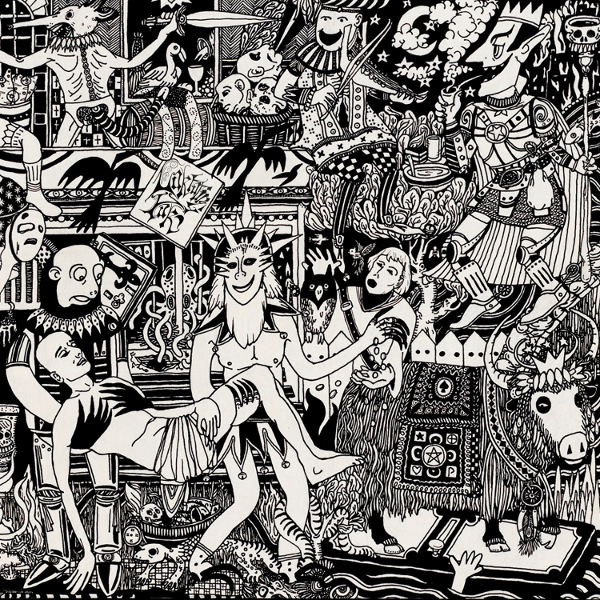 In the foothills of the Himalayas, on the Chinese side, tea with yak milk is a regional beverage, so when I was there, I gave it a try. I didn’t find it much to my liking, though I have tasted cheese made from yak milk that was pretty tasty. All of which has virtually nothing to do with the band Laktating Yak, a six-member group which may be based in Houston, Texas, but sounds like they come from another plane of existence. Theirs is a universe in which yak milk is a magical substance capable of restoring spiritual vitality as well as curing erectile dysfunction, and music has no borders that make any sense. A rumbling didgeridoo rubs shoulders of a skittering violin (or maybe the didge is rubbing the shoulders of the violin), heavy, stuttering guitar riffs compete with squawking saxophone, and serene minimalist patterns provide respite, though not without a sense of impending doom. They count Magma and RIO bands among their influences, along with Frank Zappa, but a more relevant sonic reference might be Sleepytime Gorilla Museum. Not that any of these artists sums up the sound of this very eclectic band. With two sax players in the band (Danny Kamins and Edgar Quintana) and a violinist (Charles Anderson), the rhythm section of Angel Garcia (drums), Tobin Armstrong (bass), and Charlie Bryan (guitar) have a lot of support, but their arrangements leave lots of room for all levels of complexity from ambient soundscapes to driving rock. On first listen, Origin of the Yak may not make sense, but repeated listening has convinced me it’s one of the best debut albums of 2018. Originality may not be the only thing that’s important in music, but it’s rare enough that it should be treasured when it’s found, and Laktating Yak has it in abundance. So my advice is to skip the actual yak milk and check out the music, and give it time to soak in.