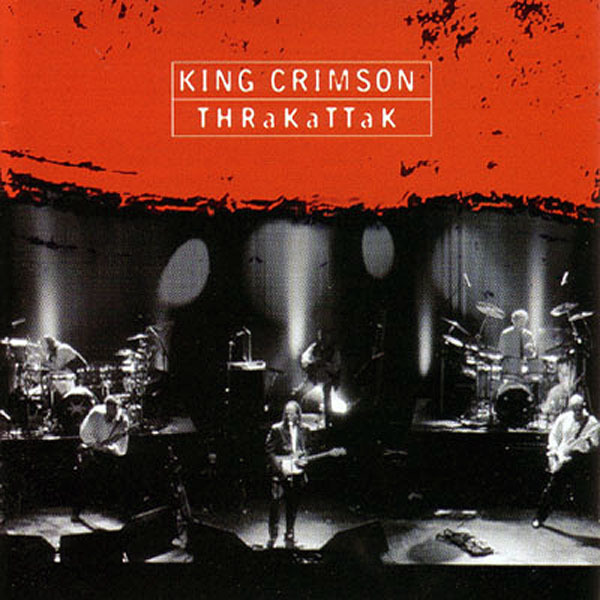 What more can be said about King Crimson that hasn't already been said? Not much that I can think of. They have continued to define and redefine the parameters of Progressive Rock (at least in its most popular manifestation) for the last zillion years, and nothing seems to get in their way. Thrakattak is exactly what I was hoping B'Boom would be — all music that hasn't been released yet. And what a treat it is. This is Crimson at its most extreme, creating a hell of a racket. If you loved some of the amorphous industrial-strength ramblings on the Vrooom CD, then this is just for you, an entire album of improvised music. One would have to go back to side two of the Three of a Perfect Pair album — the songs "Industry" and "No Warning" — to find other references for this type of Crimson work: loosely structured soundscapes and atmospheres, played with an acute sense of abandon. There is no jamming; no soloing over chord changes. And it's great to hear them shed some of the nagging limitations they imposed on themselves in the 80s, like Fripp's darn cymbal phobia. They seem more willing to allow elements of the 70s (although it still seems we need not bother hoping for songs other than "Larks' Tongues II" and "Red") to creep in, and that is something to which I cry , "More, More!" I just wish they would go lighter on all the technical gadgetry. It's no fun hearing a guitar play a piano sound, or an electric drum play a xylophone sound. I'd rather hear the real thing, or not hear it at all. In the final analysis, Crimson must be the only major rock band on the planet with the guts to release so uncompromising a work as Thrakattak. They are the last of their breed. And for that they have my undying respect.