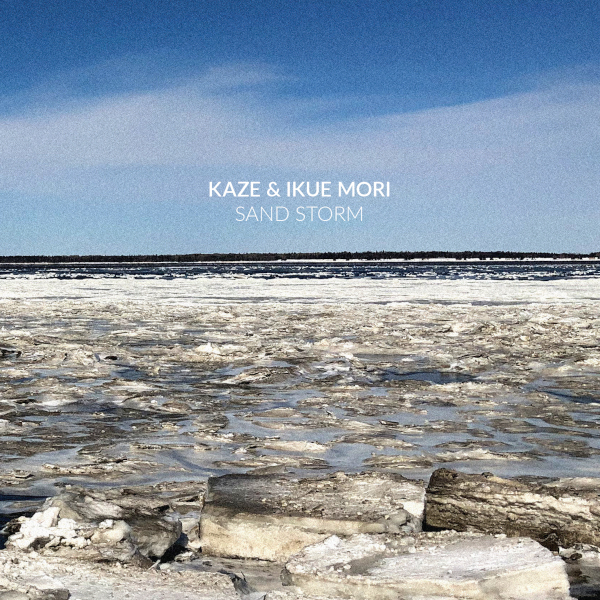 If the first 90 seconds of the 15-minute opening track (“Rivodoza”) doesn’t send you running for the door with your ears covered, then there’s probably a good chance you’ll make it through the whole album — but be warned, Sand Storm can be difficult listening of a high magnitude. It took three attempts before I made it all the way through the album in a single sitting, and even at that, I kept losing focus and scratching my head in bewilderment. Kaze is one of the many projects of Japanese composer and pianist Satoko Fujii and trumpeter Natsuki Tamura, a quartet along with French trumpeter Christian Pruvost and drummer Peter Orins. They have been making music as a quartet for close to ten years, but for this recording they added laptop wizard Ikue Mori on electronics and more. Here’s how it happened: A one week tour of Europe and Russia was scheduled for January 2020, culminating in an appearance at the Sons d’Hiver (Sounds of Spring) Festival in Paris, where they were able to invite a special guest; Fujii thought that Mori would fit in well with Kaze, so she was invited, making them a quintet for this tour. Following the tour, the feeling was positive, so studio time was booked in New York City and Sand Storm was recorded on February 12th. Anything by Kaze tends to be a wild ride anyway — think about it, free improvisation with two trumpets, drums, and piano, but this time out add Mori’s electronics to the chaotic brew and there’s even more madness in the air. But it’s not all ‘wall of noise,’ in fact even on that opening track things seem to simmer down midway through when Fujii starts guiding the piece through a gentle melody with the two trumpeters leading. In total, there are four long tracks, each separated by three shorter ones. On the CD the times add up to about 65 minutes, whereas the promo download was a full 95 minutes, way beyond the capacity of the CD medium. All seven of the tracks are there, the longer ones are shorter, but they don’t say exactly what was truncated, but that extra 30 minutes went somewhere. Regardless, if one can appreciate the playful free improvisation of five world class musicians, jump over to the Bandcamp page and give this one a listen, there's a good chance you'll like it.