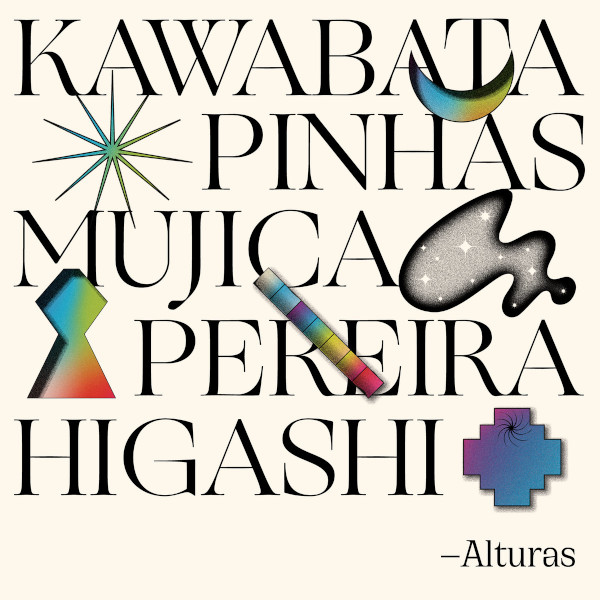 Free-form improvisation by musicians that have not worked together before is a risky proposition. The odds of disaster (or even mediocrity) are fairly high, but in the case of Alturas, which brings together Makoto Kawabata and Hiroshi Higata of Acid Mothers Temple with Richard Pinhas (who needs no introduction here), Manongo Mujica, and Juan Luis Pereira of El Polen, the result scores well to the opposite end of the scale, being a fascinating series of soundscapes composed of natural and electronic sounds. On the electric side, Kawabata and Pinhas augment their electric guitars with many effects and Higata gives us spaced-out synthesizer sounds; acoustic sources include a wide range of percussion from Mujica (including a drum kit at times) and Pereira’s arsenal of Andean wind and stringed instruments. With tracks ranging from under two minutes to nearly eleven, these masters complement each other effectively, whether they’re creating sparse soundscapes or morphing into something that could almost be called a rock riff. It may seem contradictory, but there are meditative moments featuring heavily distorted guitar where the guitar doesn’t overwhelm the mix, and the contributions of Pereira’s wooden flute can be heard amid the fuzz. “Super Andina” is the centerpiece of the set, the longest track, and it starts with weird electronic noises (presumably Higata’s synths) and quiet echoing sounds (probably guitars), and builds up slowly with high-pitched noises (guitar?), cymbals, and a quietly screechy folk violin. Mujica’s cymbals, the violin, and one of the guitars coalesce around a tempo while the other guitar fills space with a drone of feedback. By around the eight-minute mark, Mujica is on the toms and a raucous energy is developing into a crazy guitar riff topped by twittering synths. They finish off with “Charango,” which does indeed feature the little stringed instrument of its title, though droning guitar feedback is more prominent, along with a loping drum beat and synthesizer swoops. All in all, Alturas is a very listenable set of improvisations bridging electronic rock with South American sounds.