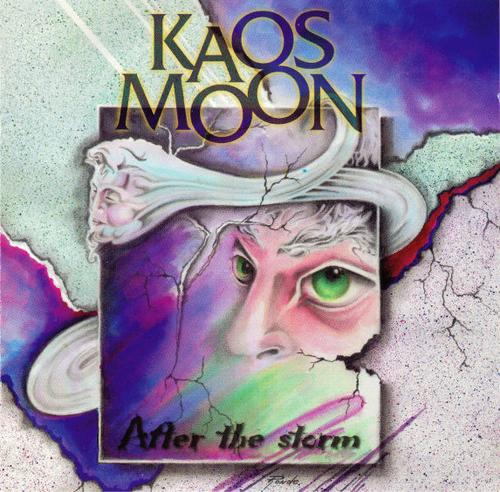 Canadian band Kaos Moon, under the direction of vocalist/keyboardist/songwriter Bernard Ouellette, has a lot in common with other prog/pop bands of today. Their music has a sound reminiscent of weaker Saga tracks and newer Pink Floyd and Marillion. The Saga connection comes primarily from guitarist Alain Pothier, whose guitar playing is the best aspect of the album. He alternates between quick staccato notes and long crunching tones, similar to the way Ian Crichton of Saga does. Other than the guitar though, none of the instruments do anything really cool. The keyboards, bass, and drums do pretty much what you would predict they would with this type of music. The vocals alternately sound like Peter Murphy of Bauhaus and Steve Hogarth of newer Marillion, but with less personality and fullness than either of those two. Ouellette's vocal cause isn't helped by the fact that a lot of the lyrics are pretty cheesy. There's just enough different aspects to the music to keep it from being considered average pop/ rock. Two of the eight tracks are instrumentals. There's a nice slow 12-string guitar part on the second track. However, all of the rhythms are typical 4/4 or 6/8 beats. Not that there is anything wrong with either of these time signatures, but if you're going to use them exclusively for an entire album, you should at least do something interesting within them. Kaos Moon doesn't. The album is slightly interesting in parts, but overall doesn't really excite.

Deus Ex Machina - De Republica – Deus Ex Machina are in my opinion the pinnacle of the 90s Italian progressive scene, an outfit continually experimenting with sound and new musical ideas. Both Gladium Caeli and their self-titled...  (1995) » Read more