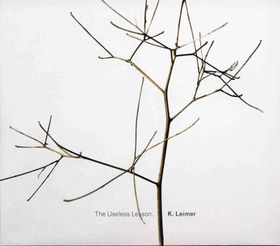 At first listen, it might seem like The Useless Lesson takes two paths, one of melodic avant-garde chamber explorations, and another of more spacious ambient territory, interleaved throughout the album, the odd tracks being the former and the even tracks the latter. Further close listens, however, reveal a lot more secrets between the grooves, clues, and keys that offer clear evidence that all seven tracks are indeed part of the same dream sequence, linked together like a cinematic continuum that has a unifying theme. Using layered keyboards, guitar feedback, occasional muted percussion, strings (violin, cello, or excellent samples thereof), and sound processing, the composer seems to strike a theme of solitude and introspection, with an evolutionary guiding spirit that directs and guides the listener through portals from one section to the next. Titles may offer clues, but to this listener they have only further obscured what the concept might be, although it matters not – the music speaks for itself. The overall subtlety and delicacy of the carefully layered sounds that comprise each section are at times wondrous and beautiful, yet never pretty, and at other times paralyzing, haunting and transfixing. Each repeat listen reveals something new that hasn’t been apparent before, even after several dozen spins. Overall, a very satisfying listen on any number of different levels.