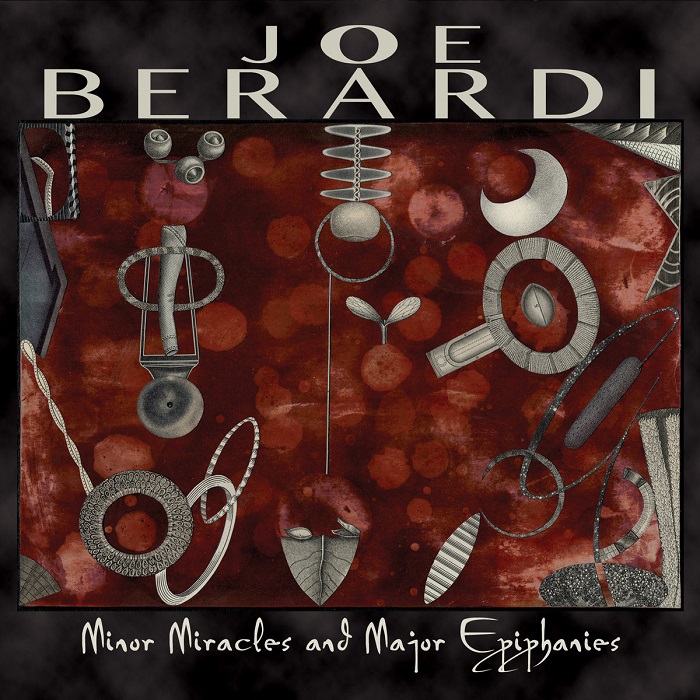 As a mainstay of the Los Angeles avant / experimental music scene for decades, as a member of the Fibonaccis, and later as one half of Non Credo, as well as working with recording artists like Nels Cline, Motor Totemist Guild, Haco, Malcolm Mooney, Lydia Lunch, Rufus Wainwright, and many others, it may come as a surprise that this is Berardi’s first solo release. And solo it certainly is — with the exception of bass clarinet on one track played by Kira Vollman (his partner in Non Credo), every sound on this album was made by Berardi. Known primarily as a drummer, he also plays keyboards, piano, marimba, guitars, electronics, broken toys, field recordings, and more, everything you hear on the album’s 16 tracks. Dropping the needle (so to speak) on the first track, it quickly becomes clear that Minor Miracles and Major Epiphanies is a collection of mini-soundtracks, things that might be suited for a scenes in a television show or a feature length movie, present or past, vignettes that convey an idea, though how they all connect together is a mystery, something the composer left for the listener to piece together. The opener, “F Hole Theme,” doesn’t even reach a minute in length, but sets the stage for all the other pieces that follow. With “A Visit to Madame Germaine,” the composer has created a piece that might work with an old-timey silent film, although the synths that carry the melody through the center part are well outside that realm. Still, it’s a wonderful piece that captures the listener’s imagination. “Fortellini” is built on rudimentary piano patterns accompanied by an interesting drum pattern along with gobs and gobs of Mellotron; it’s the track that seems to get stuck in my head at all hours. Then, midway through the album we get an earworm from 1966, Berardi’s interpretation of the baroque pop gem “Pretty Ballerina,” originally by The Left Banke and written by Michael Brown, although it, like everything else on this album, is completely instrumental, save for some voices one might hear in the field recordings that creep into the sonic fabric from time to time. Following that one up with the appropriately titled “Cheap Lo-Fi Spy” puts the listener right back into the soundtrack setting. One will encounter “Waltz Dreams of a Cigarette Girl” as the program proceeds, a most interesting piece that fits right into the cinematic atmospherics. “Delerium Carnale” is the piece where Vollman makes her appearance, a sort-of crazy march that might sound like something from an early 80s Art Zoyd album, rich with odd instrumentation, and at almost five minutes, it’s one of the album’s longest tracks. With so many diverse pieces that take the listener in many different directions, Minor Miracles and Major Epiphanies is nothing short of an absolute musical thrill ride.