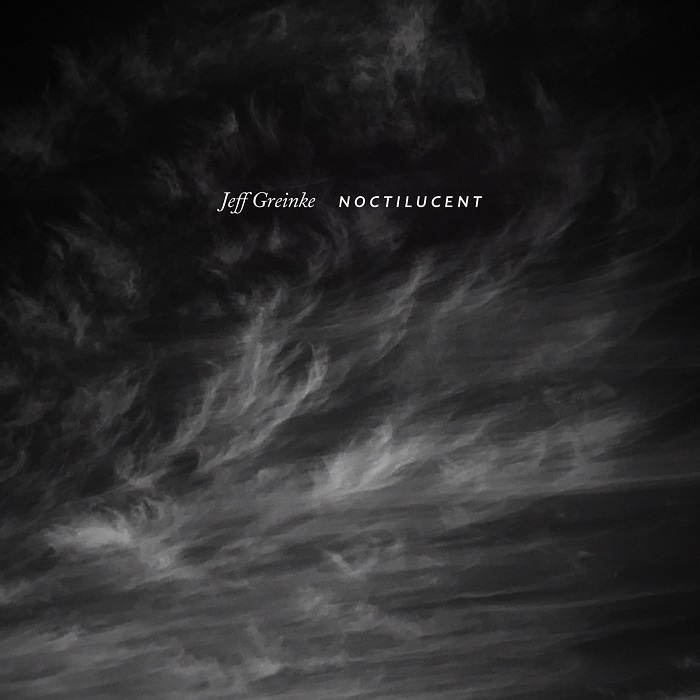 Noctilucent is a word for something that shines or glows by night; if that word inspires an image, then Greinke has chosen a befitting title for his latest release — one that will apparently be available only digitally (a download), not as a CD or LP. The nine pieces here evoke night imagery, walking through deserts lit only by moon or stars (or less), the shimmering light of distant galaxies, the solitude and isolation, the occasional sounds of insects and other nocturnal animals (watch for those rattlers and scorpions, my friend — you are alone), the occasional cloud passing by overhead. The consciousness swirls in its dark, unlimited beauty. Greinke has been at this a long time, and by this I mean the expression of natural forces and imagery through his music, going way back to the early 80s, with descriptive titles like Cities in Fog (1985), Moving Climates (1986), Suspended Pillars of Light (1983), Big Weather (1994), and many more, various titles that describe the music contained therein perfectly, His recent titles on Spotted Peccary Music include Before Sunrise (2018) and Other Weather (2021), proving that after forty years and thirty-plus albums he hasn’t run out of ideas for ways to describe the magical beauty of the natural world through his music. Noctilucent offers beautiful shimmering sonic vistas, partly floating ambient sounds, but there’s a lot more going on here, swirling clouds of warm enveloping beauty, magical sounds that appear without warning and fade from view, sparkling twinkling hallucinations in a deep cavernous space, with nary a beat or repeating pulse, yet the listener will be treated to newly discovered sounds with each repeat listen, a soundworld of its own that affects the listener’s consciousness, guiding one to new paths of discovery. Greinke is a master at creating these kinds of epics, and it’s best not to ask the details of how they are made — the listener can travel far on this powerful journey without knowing any of the mechanics of its creation. It can all be found at the link below.