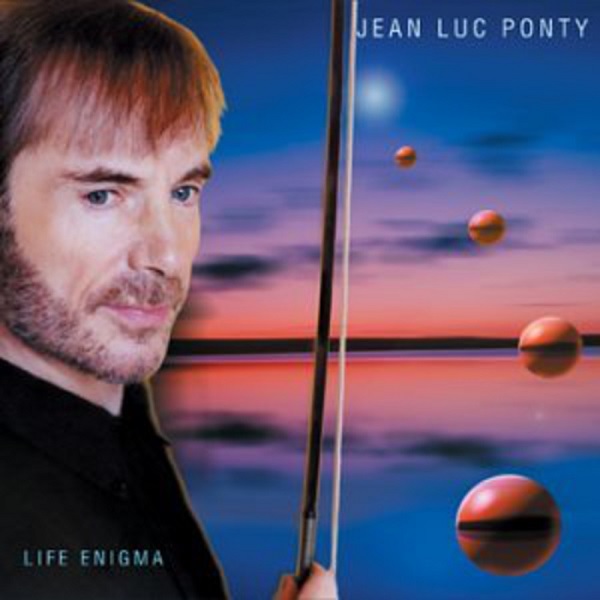 Ponty has staked out a claim over the past 30 years as fusion’s best-known violinist, and he has made numerous albums that belong in the Fusion Hall of Fame (if such a thing existed). He has kept a low profile lately and in fact has not released any new material since 1991’s successful West African-influenced comeback album, Tchokola. The release of Life Enigma on Ponty’s own label is good news for fusion fans, and his superb playing is once again clearly evident. He has an ability to make his virtuosity sound effortless, and he casually tosses off fleet-fingered scalar runs with regularity. Clearly his playing has not lost a thing over the years, and technological innovations such as his five string electric violin add to his ability to entrance the listener. Ponty also plays various keyboards and some electronic percussion on the album, and his band only appears together on four of the ten tracks. This gives much of the album the sound of a multi-tracked solo album as opposed to group collaboration, and the energy level suffers as a result. The album also lacks a guitarist to act as a foil to Ponty’s lyrical playing, and this creates a sound that is constantly smooth and melodious but without any rough edges to add interest. Life Enigma will certainly appeal to fans, but unfortunately it fails to match the energy level or originality of Tchokola.

I’m probably not unique in my history with Jean-Luc Ponty. I discovered his inventive, melodic jazz-fusion violin playing with his albums of the seventies like Enigmatic Ocean and Imaginary Voyage, then lost track of him during the 80s. I was aware that he kept working, but his New Age direction did not interest me much. So it was with great interest that I decided to check out this new CD, which was billed as a synthesis of all of Ponty’s styles, including the fusion of the earlier days. I am sad to report that there is actually fairly little of the old style present on this release. Ponty’s beautiful tone on the electric violin is readily recognizable, and there are some hints of those lushly voiced unison parts we loved, but they are for the most part backed by sterile drum machine programming and emotionless digital keyboards. A few tracks do feature musicians other than Ponty: bassist Guy Nsangué Akwa appears frequently, Thierry Arpino and Moustapha Cissé provide some drums and percussion from time to time, and William Lecomte plays piano on two cuts. Unfortunately, these accomplices appear on a series of mellow tracks that fuse Lite Jazz, New Age, and World Beat. The lack of energy really detracts from some decent writing. I have nothing against drum machines categorically. Like any other piece of musical technology, it’s what you do with them that counts. Unfortunately, Ponty’s brilliance on the violin does not carry over to electronic drum programming.