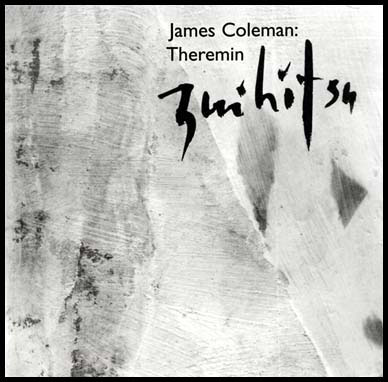 We’re all familiar with the swooping outer-space sound of the theremin, the venerable electronic instrument played by waving the hands in the air around an antenna, so when I received a copy of a CD labeled “James Coleman: Theremin” I expected that I would be in for a collection of serious (or relatively serious) music featuring that kind of sound. The first thing that’s really noticeable about this album is that that virtually nothing on it sounds like a theremin. Much of the music is very sparse, seemingly improvised non-tonal, non-rhythmic soundscapes. Coleman is joined by assorted other players on trumpet, cello, soprano sax, voice (no lyrics though), percussion, and other assorted noisemakers, such as Vic Rawlings’ electronics, “amplified cello” and “aluminum cello” (a pretty fascinating concept on its own). The title of the CD is apparently Japanese for “running brush” — a term applied to calligraphy, and it’s a particularly appropriate metaphor for the sketchy telegraphed sounds presented. It’s as if the musicians have reduced their music down to the fewest number of brushstrokes to convey what they see as the essence of the music, in the process making it so abstract that the listener must really struggle to see the patterns or meanings. In the process, they have made something that many would not call music at all, I suppose, but the sounds are rather interesting in their own right, as long as you’re not expecting a catchy tune or a beat you can dance to.