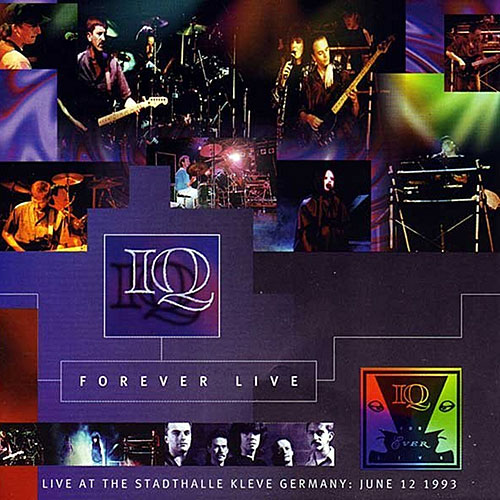 What, no "Material Girl?" I remember hearing of this supposed IQ live CD+Video compilation about two and a half years ago when IQ played in San Jose. Three years after the actual performance, the fabled box-set has become a reality. IQ has done what every band that releases a live album should do — take a single complete show and release the whole thing. No partial show cut up to fit on one CD, no mixing tracks from several different concerts, no trying to represent miscellaneous periods of the group. Just an accurate representation of the band from a particular moment in their career. Congratulations to IQ for realizing this was the way to go.

The set list is very comprehensive, with every studio album represented by at least one track. While the band was touring in support of Ever around the time of this recording, there are healthy chunks from the other albums to balance out the new material with the old. The sound quality on Forever Live is really good. It's almost too clean. Except for between songs when the crowd noise is audible, you'd be hard pressed to guess it was a live album if you weren't really familiar with their material. As for the caliber of the performance, like the sound quality, it's remarkably tight. The vocals sound better than on any of the several other live IQ shows I've ever heard, and you'd be hard-pressed to pick out an instrumental mistake anywhere. Either this was one of the band's best live performances or the cryptic "jiggery-pokery," as they call it, done after the fact was incredibly meticulous.

Conspicuously absent is much of the typical IQ stage banter. No humorous chats, no cover tunes, no heckles, no recurring "theme" pieces provide that traditional IQ spice. Olé! I guess they wanted the box-set to be a serious thing. It is nice to see guitarist Mike Holmes bow facing the wrong way at the end of the show though. They're having fun, even if it is presented in a slightly restrained way. From all the mention in the liner notes, the band was quite worried about playing "Further Away," then relieved when it was dropped from the set list the day of the show. This is interesting because it was the first of the Ever tracks to be performed live, well before that album was even released. Whatever the reasons for its departure, this heave-ho apparently provided the band with the spark needed to make a thorough, representative, enjoyable live album and video. The video parallels the accompanying double-CD with the exception that the video is missing the final encore track "No Love Lost." Maybe the cameras ran out of film? All IQ fans are aware of Peter Nicholls' legendary dramatizations in "The Enemy Smacks." This is really one example where the video aspect is really necessary to appreciate the complete impact of the song. Fans of IQ will certainly eat up this box-set. It would be a good, albeit pricey for a newcomer, introduction to the band as well. They went all-out.