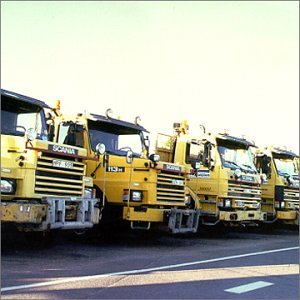 Northside has many purely traditional artists on its label, but Hoven Droven isn’t one of them. Though firmly rooted in Swedish folk music, this CD rocks hard and heavy. It’s similar to Groove, the compilation previously released on NorthSide, but has fewer jazzy elements due to the departure of trumpeter Gustav Hylén. The sound here can be best described as hard-edged Scandinavian-influenced folk-rock. The most obvious comparisons are probably to Kebnekasje, Gamarna, Hedningarna, and maybe even to the American band Boiled in Lead. The folk and rock elements are fused dramatically, with Kjell-Erik Eriksson’s fiddle consistently establishing tonal and melodic contrasts to the crunching electric guitar of Bo Lindberg, the pounding drum kit of Björn Höglund, and the bass and sax of Pedro Blom and Jens Comén. Newcomer Jan Strömstedt regularly changes sides in this balancing act, based primarily on whether he’s squeezing an accordion or pounding raucously on his Hammond B-3. There is nice variety among tracks, with a few delicate gems like “Mørkertia” and “Busters Doppolska” balancing out the headbanging pieces like “Blinn Ulof” and “Chicago.” With the exception of three tracks that feature guest female vocalists (Sofia Sandén and Ulrika Bodén of Rosenberg 7) singing together in a traditional Swedish style, the music is instrumental. The CD has twelve regular short tracks (between three and five minutes each), but it is enhanced and five additional songs can be found as MP3s when placed in a computer’s CD-ROM drive. Highly recommended to fans of progressive folk and a great place to start exploring the current Scandinavian folk-rock scene.