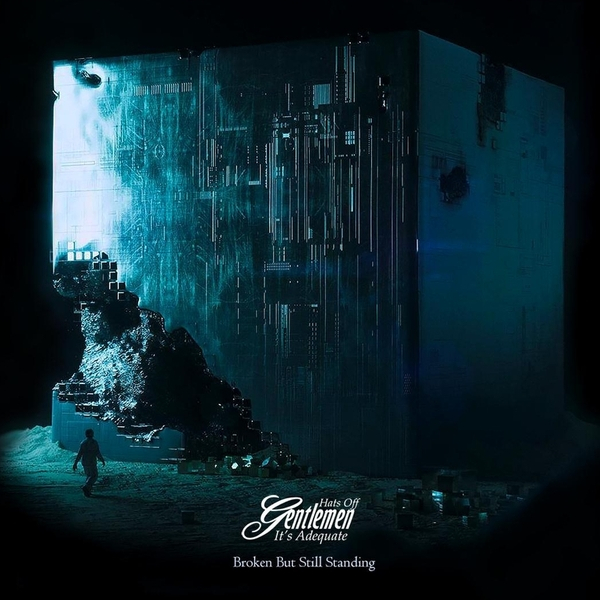 Hats Off Gentlemen It's Adequate is the musical effort of Malcolm Galloway and colleagues wife Kathryn Thomas (flute), Mark Gatland (bass), Rudy Burrell (drums), and Ibon Bilboa (guitar). On this their third album, Malcolm’s sons James and Ethan also contribute some spoken word and backing vocals. Malcolm’s 2015 release When the Kill Code Fails was about artificial intelligence. For his third outing, Broken but Still Standing is again a concept album, this time telling the story of evolution from the dawn of time to the distant future. And similar to When the Kill Code Fails, there is a mixture of instrumentals and songs across the seventeen tracks. There is a story that ties all of the tracks together and for those of you that want a deeper insight into the mind of Malcolm Galloway, you can read all of the details in the album notes. Though he maintains that his story enhances the listening experience, you can easily enjoy each of the tracks on its own in isolation. The album starts off with a dark moody electronic atmospheric tune, “Vent,” that has some similarity to Nik Turner, and passes through a number of different musical styles across the disc. The overall mood to the music is one of sadness and desperation, a bit of a downer. The early tracks provide a primordial, ancient ambiance that mixes post-Waters Pink Floyd and Jorge Reyes. As we progress through the album and “time” Malcolm picks up the tempo and adds prog rock elements to accompany his songs about a decaying world and a fatalistic view of life. On track eight, “One Day When,” he introduces some prog-jazz fusion, while retaining the gloomy atmosphere for a song that could have been written by Tim Bowness. Then there is the David Bowie influence appearing on “I Fell in Love with a Mechanical Dragon” and “Let Me Out.” The album peaks around track thirteen “Broken but Still Standing till I Fall,” a defiant message, and settles back down as androids attempt to colonize Mars and beyond. The disc ends with a message of hope for the future. There is a little bit of something for every taste, even what sounds like prog rap on “Under the Skin.”

With Broken but Still Standing, Hats Off Gentlemen It's Adequate once again proves to be a more than adequate band. Following in the path set by the previous album, Malcolm Galloway and company present a concept album told by more-or-less alternating vocal songs and instrumentals. And once again, the story has a scientific bent and an epic scope. In general, the instrumental parts are what strike me best, reminding me of classic Pink Floyd with flute added. “Lucy,” for example, features expansive synthesizer chords and a beautiful bass flute from Kathryn Thomas. Electric piano, keyboard bass, and stately drums come in to make this short track one of the album’s highlights. Flute (regular, not bass) figures in many of the other tracks, providing quite a few wonderful moments. “Lucid Assassin” is the most upbeat of the instrumental tracks, with driving synthesizers and a fast, funky drum pattern. There are two sides to the vocal tracks. Some, like “Almost Familiar,” have a gentle sound reminiscent of Pink Floyd, with picked guitar chords, blues-inflected lead guitar, padding from keyboards in the background, and a moderate tempo held down by the drums. Other tunes, like “I Fell in Love with a Mechanical Dragon,” have an energetic punkish energy that makes me think of Hawkwind’s Quark, Strangeness and Charm, a feeling heightened by the science-fictional nature of the lyrics. Galloway’s vocals are occasionally a little shaky, and work best when combined with harmony parts. But his intonation is good, and any flaws there are can be balanced by the quality of the lyrics and the writing in general. I remarked with the last album that judicious use of effects could help smooth out the vocal tones, and that still holds true. Where the flute benefits from a close microphone and unaltered recording, the vocals are the opposite. It appears from the credits that most of the drums are programmed, but they are generally well done, and aside from the somewhat dry sound they have, a listener might well not realize they’re not real. All in all, this is a fine release, a good example of a progressive rock concept album that goes its own way. Maybe a bit of tweaking in the mixing and mastering would improve the sound, but the music itself is first rate.

Various Artists - Tales from Yesterday – With the blessing of original artwork by Roger Dean and performances included by three Yes alumni, this one contains a little bit of everything – some of the more 'faithful' covers, some...  (1996) » Read more

Cos - Viva Boma – Here we have Musea’s reissue of the second Cos album, recorded in 1976. In addition to the original album Musea included four bonus tracks recorded in Cos’ rehearsal room on a 4-track...  (1997) » Read more

Bill Nelson - After the Satellite Sings – Solo artist extraordinaire (due in no small part to the huge volume of work generated in almost 30 years), Bill Nelson's latest collage is a splash of modern sophisticated pop, sampled amusing...  (1997) » Read more